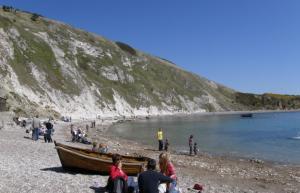 The shingle beach at Lulworth Cove

Beaches to the west including Middle Beach and Durdle Door which are open all year round whilst Mupe Bay and Arish Mel Beaches to the east of Lulworth are only open at weekends in August – at other times they are used by the military. Lulworth Cove is hugely popular. Thousands visit every year! The naturally formed attraction is the beautiful blue lagoon-like bay in the shape of a horseshoe. The coast can be walked via the South West Coast Path and there are several permissive paths and steps down to the beaches at various intervals. East Lulworth is a small hamlet in the heart of the Purbeck countryside. It’s a picturesque, traditional Dorset hamlet with 17th century thatched cottages. 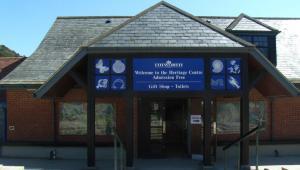 The Lulworth Cove Heritage Centre is where you can find out all about the varied geology of the Jurassic Coast. There’s a huge car parking area in the village to accommodate everyone who comes to see the stunning Lulworth Cove. Along with your car parking fee you can get a free guide from the Heritage Centre which has a range of displays and videos showing how the natural processes have shaped the coast and how the variety of different rocks have been formed over millions of years. 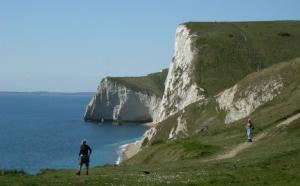 Coast Path walking along the Jurassic Coast near Durdle Door

Lulworth is famous worldwide for its crescent shaped bay formed naturally around 10,000 years ago. The picturesque bay with its clear blue waters is flanked by a thin shingle beach which is sheltered from coastal winds – the perfect spot to while away the hours with a picnic or for the more adventurous a quick dip or a spot of snorkelling. Head up the cliff paths for the best views of Lulworth Cove and you’ll also see some interesting rock formations where the Lulworth Crumple reveals how the layers of rocks have slumped to look like a rhinoceros hide. Arches are being formed in the rock at Stair Hole. In a few hundred thousand years or so the newish bay being formed at Stair Hole will erode back and merge in with Lulworth Cove. Coastal walks lead out from Lulworth over the cliffs to the east and west. The land to the east is MOD land and can be inaccessible when they’re firing. Heading east via the steps at the east end of the beach, a fantastic clifftop walk will take you to the Fossil Forest and ripples in the fossilised sand of an ancient beach and along to Mupe Bay. All along this coastline you’ll find natural bays cut into the rock and interesting rock formations. 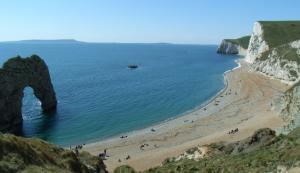 The famous Durdle Door rock arch just west of Lulworth forms part of the small hard Portland limestone strip along the Jurassic Coast here. You can reach it from Lulworth or the Winfrith villages and you’ll find a pay and display car park close by, accessible through the caravan park, with a coast path leading down to Durdle Door. It is the power of the sea that has shaped Durdle Door, eroding softer rock amongst the harder Portland limestone. At one point there would have been many caves along this coastline. From beach level, look closely at the rock slabs adjacent to the arch and see if you can spot the oval fossil ripple marks which are the remains of a fossil forest. Epic coastal walking is along the coast path atop of high chalk cliffs west of Durdle Door. You’ll get excellent views of how the sea has eroded the chalk into a stack at Bat’s Head and Butter Rock.