Like the Liver Building, Liverpool’s two vast cathedrals, both very different, are iconic buildings within the city. The older Liverpool Anglican Cathedral (the largest Cathedral in the UK) has towered over the city for over 100 years, sited as it is on St James’ Mount and visible from miles away. Celebrating its centenary in 2004, the Anglican cathedral’s first foundation stone was laid in 1904, but the cathedral wasn’t officially consecrated until 1924 due to delays caused by the First World War. The building miraculously survived the heavy bombing of the Second World War intact! 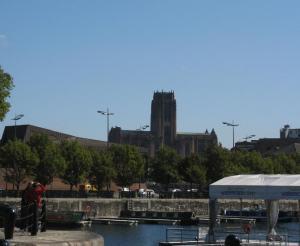 Liverpool Cathedral view from the waterfront

Liverpool Metropolitan Cathedral is the city’s Roman Catholic Archdiocese also just a short stroll from the city centre and Liverpool Central Station. Officially consecrated in 1967, and designed by Frederick Gibberd, the Metropolitan Cathedral is renowned for both its distinctive conical hat and stunning lighting. A visitor centre and piazza cafe bar are all on-site. Liverpool Central station is just a short walk from the cathedral, accessible via a short stroll up Brownlow Hill and surrounded by University buildings – why not combine your visit with a trip to the nearby Victoria Gallery & Museum!

What could have been as regards a Catholic cathedral in Liverpool city centre makes fascinating reading. The likes of the great Catholic church designer Pugin and creator of famous memorials – Sir Edwin Lutyens both submitted designs for a catholic cathedral in the city, however it was Gibberd’s ground breaking modern design in the 1960s which was finally constructed. Lutyens did complete a crypt and treasury, which are open to the public often with exhibitions on display.

Liverpool’s Metropolitan Cathedral is open Monday to Saturday, 7.30am to 6pm and on Sundays from 7.30am to 6pm. With marble floor and a unique modern take on multi-coloured stained glass, the effect inside of this most individual of circular cathedral designs is not to be missed. The design is particularly unusual with the main conical drum and roof of the nave supporting the cathedral’s tower and the tappering lantern tower – like a lattice-work crown – is iconic modern design at its best.

Liverpool’s Anglican Cathedral on St James’ Mount is just a short walk from the city centre and offers an eclectic mix of attraction experiences from embroidery exhibitions to sunset tower top tours for spectacular views of the city. A landmark building in the city which like St Paul’s in London survived heavy World War II bombing, Liverpool Cathedral is open daily.

Attractions within include a 10 minute film documenting the history of the Cathedral, an audio tour of the building itself (available in numerous languages) and the Tower Experience – which promises not only spectacular panoramic views of the city and waterfront, but on a clear day the view can reach as far as Blackpool and across the Mersey towards North Wales. You’ll also take in the great cathedral bells and an Embroidery Gallery. A cathedral shop, restaurant, cafe and private dining are all available on-site.