The museum includes a little cinema with 15 seats showing Laurel and Hardy film clips and the collection digs deep into Stan Laurel and Oliver Hardy’s past, featuring newspaper clips, photography, memorabilia and more. Fascinating detail is revealed on Stan Laurel’s early background in British music hall with detail on his British showman father. Stan went over to the US with the Fred Karno musical-comedy troupe in 1910 along with Charlie Chaplin!

Stan Laurel, alias Arthur Jefferson, was thoroughly researched by Bill Cubin in those early days and Bill interestingly uncovered Stan Laurel’s birth certificate and the fact that the then Arthur Stanley Jefferson was not born in North Shields as originally thought, but here in Ulverston on 16th June 1890. Ulverston was then in Lancashire, and Stan was born in his grandparent’s house, Foundry Cottages, now called Argyll Street. Stan Laurel died in 1965. 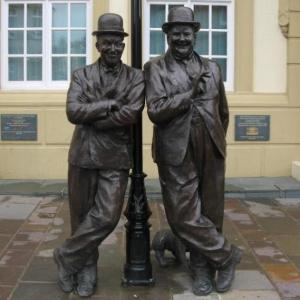 Word of mouth spread on this superb Laurel and Hardy collection and the museum moved to its larger current home in the Roxy Cinema in April 2009, a date which coincided with the unveiling of thestatue of Laurel and Hardy in Ulverston centre outside the Coronation Hall theatre.

How Laurel and Hardy met is explored in displays at the Laurel and Hardy Museum. Oliver Hardy, alias Norvell Hardy was born on 18 January 1892 in Harlem, Georgia and he died in 1957. Oliver Hardy was expected to move into a military career, but he rejected that and instead opened a movie theatre in Milledgeville, Georgia. He worked as an actor in Jacksonville, Florida, location of the Lubin film company and later moved to Hollywood.

By the mid 1920s he was already pretty established and was working as an all-purpose comic at the Hal Roach studio. The name of Hal Roach is synonymous with Laurel and Hardy, and Roach began working with them as a comedy pair in 1926. Together they easily rode the transition from silent cinema to talkies, and won an Oscar for the 1932 film ‘The Music Box’.