Knighton in Powys, Mid Wales, is known in Welsh as Tref-y-clawdd, meaning ‘town on the dyke’. The nearest larger towns are Llandrindod Wells, Leominster and Newtown. Set in the Marches – the border or disrupted country, this land has been contested throughout history. 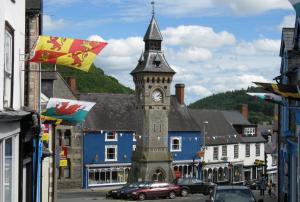 Knighton is directly situated on Offa’s Dyke and is a thriving market town built around the River Teme on the Wales/England border (a small section of the town, including the railway station, is actually in England). With evidence of stone age settlement, two Norman earthwork castles and an eleventh century church, Knighton’s commercial role came alive in the fifteenth century wool trade, and later as an important drover route.

It is an attractive, picturesque town with many half-timbered buildings, steep, winding streets known as “The Narrows”, and an attractive clock tower. Close to Shropshire and Ludlow, there’s plenty to do in the town and surrounding areas. 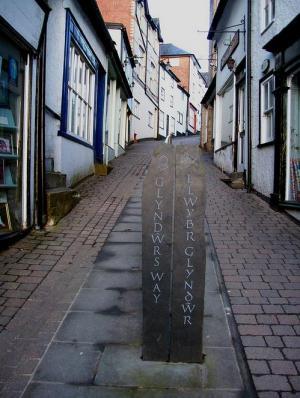 Offa’s Dyke is a 177 mile National trail which covers the whole Wales/England border. A well-preserved section of the Dyke runs straight through Knighton close by to The Offa’s Dyke Centre, a visitors centre for those interested in walking the Dyke but also for those fascinated by historical border conflicts. Interestingly, Offa’s Dyke isn’t the only Dyke near to Knighton – Wat’s Dyke runs parallel to the East, just inside England. Glyndwr’s Way, another National Trail, meets the Dyke in Knighton and both are suitable for walkers and cyclists of all abilities. Helpful maps are available from the visitor centre outlining routes with varying levels of difficulty – for example, circular routes which stay close to the town, and those which take the walker over longer and more difficult terrain.

Whichever you choose, this is a wonderful location for cycling. Knighton has been defined as a ‘Cycle Break Centre’ – a town encouraging cyclists with suggested inspirational routes of between 9 and 22 miles.

The Knighton Show – held annually in August – includes a carnival, horticultural exhibits, vintage cars, horse, dog and animal shows, good stalls, and even a shire horse competition. The show grows year after year and is very popular with visitors, as is the almost-annual Town Crier Festival which allows about twenty town criers from all over the country to compete.

Knighton is positioned at the intersection of the A4113, the A488 and the B4355 just on the border between Wales and England. More major A roads can be easily reached, as can the M5 to the East at Worcester. Knighton also has a railway station with regular scheduled services.

We are proud to offer visitors to Knighton a wide selection of holiday cottages – whether you’re looking for something suitable for families and pets, groups or even for a romantic retreat. We are also able to offer delightful guest houses and pubs, so you can be sure we offer accommodation to suit all needs and budgets. Do consider staying with us while you walk along Offa’s Dyke – see the listings below for more inspiration.