The latter period of Jane Austen’s life was spent at Chawton living with her mother and sister for eighteen years. Jane and Cassandra used to take a daily walk to Alton where they would shop and visit their brother who ran a bank and where the post was delivered. The villages of Alton and Chawton have their own Jane Austen trails. These take you around the everyday places that Jane would have seen or visited such as friends and relatives’ houses, doctor’s or banks. Of course, the main attraction in Chawton is the Jane Austen’s House Museum.

Jane Austen spent a great deal of her life (the first 25 years) in Steventon near Basingstoke. The family lived in a late seventeenth century rectory surrounded by fields and countryside where the family grew their own vegetables and Jane would often walk. Unfortunately the rectory was demolished soon after Jane Austen’s death. It was here that Jane first felt most settled which enabled her to start writing by drafting Northanger Abbey, Sense and Sensibility and Pride and Prejudice. However these were not published at that time despite her father offering Pride and Prejudice to a publisher in 1797 who turned it down without reading it!

Steventon Church was well known to Jane as one of the churches where her father was rector. She regularly attended services here, and several of her relatives are buried in the churchyard. Her brother James took over the parish from his father. One of the parish registers from that time has Jane’s signature written inside the front cover on a specimen marriage entry! The Austen family left Steventon in 1801 when Jane’s parents unilaterally decided to move the family to Bath where their father wanted to retire. Jane was not happy about the move and didn’t enjoy her time there, finding life too frenetic with regular social engagements which interrupted her ability to write. 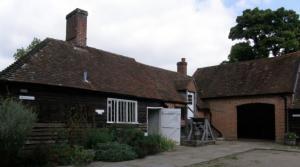 After a brief spell in Southampton after retuning to Hampshire from Bath, Jane moved to Chawton with her mother, elder sister Cassandra and her sister-in-law Martha Lloyd. They lived in what had been the bailiffs’ house on the Chawton Estate. Jane’s brother, Edward Knight, who had been adopted by wealthy relatives at the age of sixteen, inherited their estates at Godmersham Park near Canterbury in Kent and Chawton Great House in Hampshire. He let the cottage in Chawton rent free to his mother and two sisters.

Moving back to the Hampshire countryside was a huge relief to Jane and meant that she was finally able to settle down to her writing seriously after the upset and moves to Bath and Southampton. It was here that she assumed a business-like manner to her writing and where she revised and completed the majority of her writing – finishing off Pride and Prejudice, Sense and Sensibility and Northanger Abbey. Novels written entirely at the house in Chawton include Mansfield Park, Emma and Persuasion. 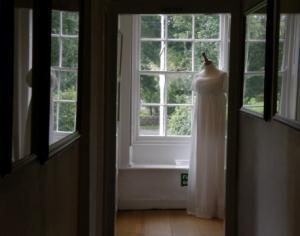 The seventeenth century red brick house where she lived at Chawton is now the Jane Austen’s House Museum. Here Jane spent the last eight years of her life. You can visit the house and garden which has changed little over the years. Rooms are decorated in the period style with several personal items and furniture that Jane would actually have used on display including her writing desk. Dotted around the house are several letters in Jane’s own hand and there is a patchwork quilt made by Jane, Cassandra and their mother.

You can pick up Jane Austen related gifts at the house as well as checking out the small but comprehensive book shop which has biographies, films and of course the whole range of Jane Austen novels. Chawton is a small village set in the heart of the East Hampshire countryside. It’s well worth having a stroll around the village which has many traditional thatched cottages. Jane’s sister, Cassandra, and her mother are buried in the churchyard in Chawton. Jane’s grave is at Winchester Cathedral.