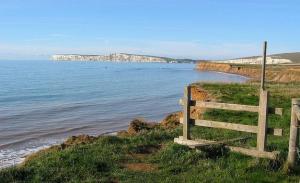 Coast Path at Tennyson Down near The Needles

The Isle of Wight is a perfect location for getting away from it all. There is plenty of hillwalking across the Downs and the Isle of Wight Area of Outstanding Natural Beauty which covers a vast area of the island. Walking is such a popular pastime on the island that there are two annual Walking Festivals in May and October to encourage people to get out and explore different routes. Cycling is another good way of seeing more of the island. The Isle of Wight – ‘Bicycle Island’ – is amongst Lonely Planet’s Top 10 World Cycling Routes!

No-one could come to the Isle of Wight without touching on the sailing culture that is such an important part of island life. The internationally renowned Cowes Week brings thousands to the island for the week long regatta and offers the chance for beginners to have a go. Alternatively you could book yourself on one of the courses offered by training organisations on the island. Best surfing beaches are around the southern and north west coastlines of the island and include Freshwater Bay, Ventnor, Shanklin, Sandown and Whitecliff Bay. 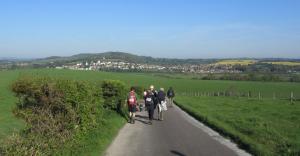 Walking around Culver Down, Isle of Wight

Almost half of the Isle of Wight is an Area of Outstanding Natural Beauty. It includes large parcels of land in the west, east and north of the island as well as two heritage coasts – The Tennyson Heritage Coast around the north west coast incorporating The Needles, and the Hamstead Heritage Coast on the north coast. Spectacular sea cliffs and chines, beaches, ancient woodlands, chalk downland and heaths, hamlets, rural villages, harbour towns, castles, even fossilised trees and dinosaur footprints all feature across the Isle of Wight AONB. In recent times the island has become known as ‘Dinosaur Island’ and is a top spot for fossil finding!

The best way to explore the Isle of Wight’s natural beauty is on foot or by bicycle. The Isle of Wight Coast Path runs for 67 miles around the entire island. You can tackle the whole route with overnight stays along the way or break it up into manageable day walks. Popular sections include Ryde to Cowes (8 miles), Niton to Sandown (9 miles) and Cowes to Yarmouth (16 miles). Other great walking trails take in coast and countryside on the island like the little Freshwater Way (5 miles), the Tennyson Trail (14 miles) and the Stenbury Trail (10 miles). Download maps for all these trails and more on the Isle of Wight Walking Festival and AONB websites.

A good introduction to the island is to take part in the Isle of Wight Walking Festivals held twice annually in May and October. The events include hundreds of themed guided walks for all abilities from fossil hunting guided tours to challenging round island three day walking events. Furry friends are warmly welcomed too and dogs travel free on ferry services.

Cowes Week is the biggest event in the yachting calendar and is the oldest annual sailing regatta in the world. The Isle of Wight is the home of sailing with its celebrated annual regattas. The Solent is always full of visitors and residents sailing to and around the island. Famous sailors such as Ellen McArthur have their home on the Isle of Wight as it’s such a fantastic training ground. If you fancy having a go yourself you’ll find a wide choice of activity centres and sailing/ yachting clubs on the island offering courses for all abilities. Top choices include the UKSA Maritime Academy which is based in West Cowes. They offer courses for yachting, motoryacht, RIB and powerboat training as well as leisure watersports such as dinghy sailing, windsurfing, kayaking and kitesurfing. 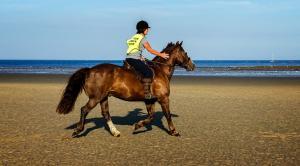 Horse Riding on the Isle of Wight at Bembridge

Downs and coastal horse riding on the Isle of Wight is incredibly popular and a choice of riding schools on the island offer the opportunity to explore Wight’s beautiful bridleways. Great family cycle routes and trails are also on offer and the Isle of Wight hosts an annual Cycling Festival in September. The Isle of Wight also makes a great base for a golfing holiday or short break, with eight premier golf courses located on the island including two first class 18 hole courses at Freshwater Bay and Shanklin and Sandown.

You’ve 64 miles of coastline on the Isle of Wight offering ample opportunities for fantastic sea fishing experiences. The sheltered waters of the English Channel and Solent are great gentle areas to learn to fish. Top spots for fishing and picking up boat charters include Ryde, Bembridge Harbour, Alum Bay and Fort Victoria/ Yarmouth – the home of the annual British Cod Championships!