The Isle of Wight hosts a packed programme of festivals and events throughout the year including award-winning walking festivals and sailing events. Cowes Week – the week long sailing regatta attracts competitors and celebs from around the world. The fantastic firework finale is not to be missed. If you’re more musically oriented you’ll find plenty of music festivals in a variety of genres. Since 2002 the Isle of Wight Music Festival has been revived and attracts a wide range of artists. If it’s more of a dance based festival you’re after try the acclaimed Bestival. Both of these famous music festivals are held near Newport. The Isle of Wight International Jazz Festival takes place annually in June, with performances featuring at different venues across the island. There are popular walking festivals in May and October, a big cycling festival in September and various seasonal themed events. At Halloween the island becomes ‘The Isle of Fright’, and enjoy Victorian themed festivities at Osborne House across the Christmas season.

Cowes Week is the biggest event in the yachting calendar and is the oldest annual sailing regatta in the world – running since 1826. It’s exclusivity was sealed by the patronage of the Prince Regent and the royal family have continued to attend since. Cowes Week takes place at the beginning of August and attracts around 100,000 spectators to the island. The eight day event includes a host of sailing competitions in which 1,000 boats take part. The event has a fun festival atmosphere whether you’re on the A-list or not. The races make for fantastic viewing and you can book a boat trip to get the best view of the action.

The best vantage point on land for the racing start lines is Cowes Parade. It is also the central information point for Cowes Week and you can sign up for a free sailing taster session. Street entertainment, live music, a champagne seafood and oyster bar, the Sail for Gold bar and BBQ keep the crowds fed, watered and entertained. Cowes Yacht Haven is the social centre for the event where yachtsmen and spectators alike can mix amongst the champagne bar, beer tent and food court. There are also a range of retail outlets and the variety of live entertainment adds to the festival feel.

One of the original late 1960s music festivals, The Isle of Wight Festival was first held on the island in 1968. Bob Dylan and The Band appeared at the event in 1969 and it’s biggest year in 1970 featured iconic performances by Jimi Hendrix, The Doors, The Who, Joni Mitchell and many more. Around 600,000 were estimated to have attended the 1970 event, and this sparked the ‘Isle of Wight Act’ which banned gatherings on the island of over 5,000 people. The Isle of Wight Festival was revived in 2002 after what was a 32 year break, and today it’s one of Britain’s top music festivals held annually in June at Seaclose Park, Newport. Getting there is made easy by a network of seamless transport links from the mainland including bus links from ferry landing points on Wight direct to the festival venue. 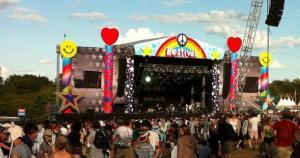 The dance oriented Bestival is an award-winning music festival on the Isle of Wight. It’s a three day boutique festival which has been going since 2004, organised by leftfield DJ Rob da Bank. Bestival is a green and politically aware festival that is renowned for its fancy dress audiences. It takes place annually in September at Robin Hill Country Park to the south east of Newport.

The Isle of Wight hosts two walking festivals annually. The first takes place in early May and the second in late October, and both offer a superb programme of guided walks, many of which are dog friendly. The island’s award-winning walking festivals are perfect for not just heading off on a host of healthy walks around the coast and interior, but also for discovering more about the landscapes, geology, famous residents and history of the island. Guided walks come in a variety of themes. Some explore the wooded valleys of the Chines and others take in ancient landscapes like Culver Downs. There are walks following the trails of famous island residents like the great scientist, astronomer and philosopher Robert Hooke born in Freshwater in 1635. Or discover more on Wight’s famous garlic growing industry on the Garlic Farm Walking Tour.

The Isle of Wight has now firmly established itself as ‘Bicycle Island’. The big annual Cycling Festival takes place in September and you can bring your own bike across free of charge on most ferry services. The island has over 200 miles of coast and countryside cycle tracks, bridleways and byways to explore and the Cycling Festival is a perfect introduction. The programme is packed full of unique cycling events from trails and tours to The Cycle Cinema, ultimate challenge mountain bike experiences and competitions.

The Isle of Wight hosts year round themed festivals and events coinciding with seasonal holidays and celebrations. Come October and during Halloween it’s lights up for the Festival of Light featuring magnificent ‘electric woods’ illuminations centred around Robin Hill Country near Newport. The festival is inspired by the Hindu Festival of Diwali. The Isle of Wight or rather ‘The Isle of Fright’ is the place to be at Halloween when the island draws on its renowned spooky heritage and hosts a range of ghost walks and scary themed events across attractions including Carisbrooke Castle and the steam railway.

Victoria and Albert’s historic family home Osborne House in East Cowes is the centre for the the Isle of Wight’s Victorian Christmas events and festivities through December. You might even catch a glimpse of Queen Victoria as you take a tour of Osborne’s rooms all dressed in period style Christmas decorations. Activities include traditional Victorian games, a vintage funfair and plenty of roasting chestnuts along the way.

For jazz fans the Isle of Wight International Jazz Festival is a must. Established in 2005, a whole host of artists have been part of this acclaimed festival including Cleo Laine and Humphrey Lyttelton. Rhythmtree is another of Wight’s lesser known music festivals. The three day event showcases a diverse range of music genres and world instruments.