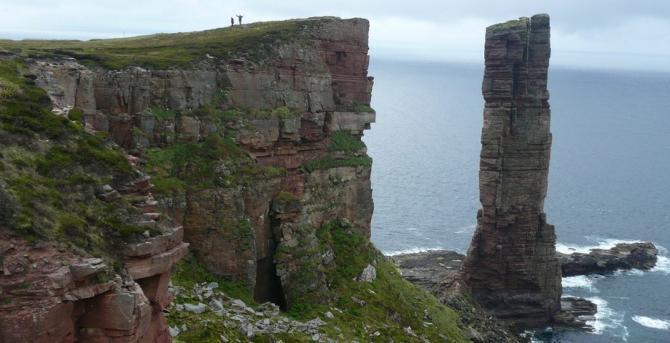 The Old Man of Hoy

Burray is the first island South of East Mainland connected by the Churchill Barriers. It has sandy beaches, coastal walks and some facilities including shop, bar and garage. Burray’s main attraction is the Fossil and Heritage Centre with glow-in-the-dark rocks, fossils and wartime memorabilia. Some of the island’s ancient archaeological sites have been destroyed or lost by erosion but the site of two brochs can still be seen on the northeast of Burray. Burray’s also great for water sports, and the Scapa Flow Diving Centre offer guided dives to the many World War II wrecks hidden in Scapa Flow. 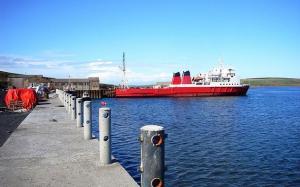 South Ronaldsay is the most Southerly island connected to Mainland by the Churchill Barriers. It’s a largely farming island, host to agricultural shows and ploughing competitions (for example, the Boys Ploughing match where boys dress as horses). Being the closest Orkney island to mainland Scotland there are two ferry ports on South Ronaldsay, at Burwick and St Margaret’s Hope. Buses connect the ferries to Kirkwall. The old village smithy has now been turned into the Smiddy Museum which is full of old farming and blacksmith tools and is worth a trip.

Or why not look at the Marine-Life Aquarium at Pool Farmhouse to explore the creatures and habitats of the seas round the Orkney Islands.

A special attraction of South Ronaldsay is the Tomb of the Eagles – with coastal walks to two historic sites, one of which is a 5,000 year old chambered tomb where bones of around 340 people, eagle claws, bones, pottery and more were found. There’s a home-made skateboard contraption which you have to lie on and pull yourself through the narrow, low passage into the tomb itself, so children will adore this!

Hoy, the second largest island in the Orkneys, is home to dramatic high mountains and is visible from much of Mainland. Popular with World War historians, the Scapa Flow Visitor Centre and Museum is also a must. Most of the Northern part of Hoy is uninhabited, the remainder being covered in open moorland where mountain hares, great skuas, merlins, kestrels and peregrine falcons are the main inhabitants. With spectacular sandstone cliffs, and the sea stack (and climbers’ challenge) The Old Man of Hoy to gaze in wonderment at, there’s also Berriedale Wood and the RSPB Reserve to visit – this is the most Northerly woodland in the UK.

The flatter Southern part of Hoy is where most of the Hoy’s population is settled. Lyness the main town is something of a museum in itself having been used by the Royal Navy during both World Wars and many traces still remain of this past. Lyness’s large naval cemetery holds the bodies of victims of the Royal Oak disaster and Battle of Jutland. The Lyness Naval Base and Interpretation Centre is housed in the old pump house at Lyness naval base and tells the eventful history of the base. 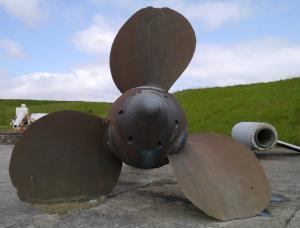 Propellor for HMS Hampshire at Lyness