Holywell, in Flintshire, North Wales is a settlement on the River Dee estuary, close to Flint and Connah’s Quay, and famous for its healing well.

Historically, Holywell grew, together with its lead, copper and cotton industries, because of abundant fresh, mountain water. 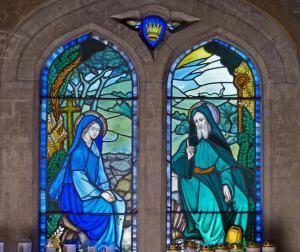 Its name is directly taken from the holy well, St Winefride’s. In 660, she spurned the advances of the local chieftain, and local folklore claims that a spring rose up where her head fell. The site’s reputed healing powers (equated to those from Lourdes) are a big pull for pilgrim visitors, so the shrine was encased in its current building in the sixteenth century. The spring comes through the open lower crypt and into an outdoors bathing pool. St Winefride’s Chapel sits above this crypt.

Holywell is the original source for Malvern spring water, which dates all the way back to 1622.

The (largely Georgian) town centre is peaceful and picturesque, home to around 60 listed buildings and many small, family shops.

Holywell is the only Welsh location with so many scheduled ancient monuments – seven in fact, and many other fascinating historical buildings etc. Here’s just a few to whet your appetite – Basingwerk Abbey, a now-ruined, twelfth century Cistercian abbey, first a home to monks (the first to use the Holywell Stream to grind corn and treat wool) and then to an artistic and economic community; Maen Achwyfan, a 12-foot-high monolith with Celtic/Viking shaft carvings, and probably the tallest wheelcross in the UK; the Coed y Garreg Watchtower, a round stone-built tower whose mysterious origins are debated – was it perhaps a Roman lighthouse or a seventeenth century watchtower…?

This park follows the Holywell Stream. With many authentic buildings on site, many others have been moved and reconstructed there, to be furnished historically as visitor attractions. Take into account the farm museum and the picnicking and wildlife spotting opportunities, and this is an excellent place for a family day out.

How to get to Holywell

Holywell is easily accessible, being just off the A55, the main coastal road of North Wales. There is no train station at Holywell, but nearby Flint has a regular service. Very close to Chester, Holywell is connected to the main motorway network of the UK by the M53.

Where to stay in Holywell

We are pleased to offer the visitor to Holywell some quite wonderful holiday cottages, bed and breakfasts and hotels. Whether staying for a romantic break or for a family/group holiday, we have some inspiring accommodation from which to explore the surrounding countryside of North Wales and Snowdonia, so do take a look at our lists today.