Heritage in the UK

Take a tour of magnificent palaces like Oxfordshire’s Blenheim and Yorkshire’s Castle Howard, mighty minsters and cathedrals at York and Canterbury or head off on North East Scotland’s castle trail featuring coastal headland perched castle gems like Dunnotar castle. History and heritage is rich and runs deep in the UK, with ancient prehistoric standing stones and monuments in an eclectic mix of locations from the Orkneys to the iconic Wiltshire sites of Stonehenge and Avebury.


B&B Guest Houses in the UK 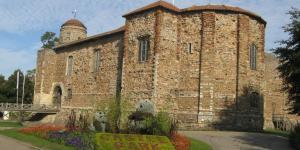 Colchester Castle is the biggest Norman Keep in Europe

Stay in spectacular Roman cities like Chester and Chichester or famous medieval villages like Suffolk’s Lavenham. The UK is packed with world famous feats of engineering and pioneering industrial heritage sites from the mining trails of Cornwall to the great Falkirk Wheel connecting two canals in Scotland. Explore Great Britain’s fascinating heritage in all its forms across world class museums in ancient cities like Cambridge and Oxford. Spectacular Royal estates open for public tours include Sandringham in Norfolk and Balmoral in Scotland’s Royal Deeside. Discover the history and heritage of Britain, find historic accommodation in the UK and book online with iknow.