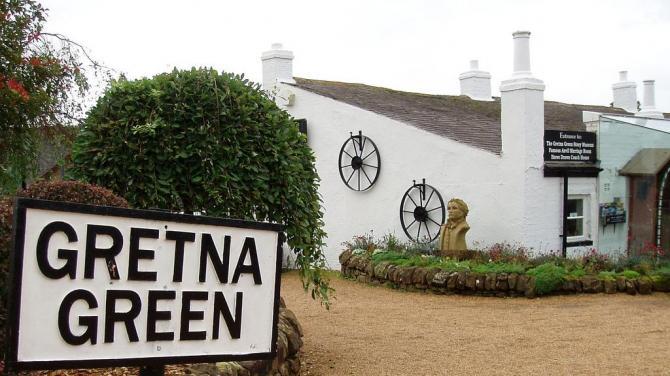 Gretna, in Dumfries and Galloway, is very close to the England/Scotland border and to the inlet of the River Esk right at the most inland point of the Solway Firth. Only just over ten miles separate Carlisle and Gretna.

Gretna’s name means a hill of gravel, which doesn’t sound overly inspiring, but Gretna has a quite recent historically-interesting part. The town itself was built to provide workers in the new munitions factory with accommodation during the First World War. This huge factory, built on the Solway Firth, was created to produce cordite – a type of ammunition which replaced the more old-fashioned gun powder as a propellant for bullets and shells. The town of Gretna was intended to house 20,000 people and was completed in as little as two years. The streets and buildings have now become historically and architecturally important, with many of the buildings having now achieved listed building status.

Gretna and nearby Gretna Green have historically been famous for the weddings of runaways – because of Scotland’s liberal marriage laws and its close proximity to the English border. Many facilities are still in place today if you wish to get married in Gretna, which performs a massive 5,000 wedding ceremonies annually. The Old Blacksmiths Shop, a focal point for many couples, is now a visitor attraction. Gretna’s position as a Border town is crucially important, not only because of these marriages, but as an actual landmark too – the Lochmaben Stone, a megalithic standing stone about a mile from the Solway Firth, has been a recognised border marker for hundreds of years.

To the West of Gretna and on the way to Kirtlebridge, is the birthplace of Thomas Carlyle (a 19th century Scottish philosopher still of sardonic interest today), and the mysterious Merkland Cross which may have served as meeting place, market focus, or even a preaching cross.

How to get to Gretna

Gretna couldn’t be nearer to the main motorway network as the M6 from Carlisle runs straight through the town. A-roads (the A75 from the West and A6017 from the East) ensure that Gretna is very accessible, especially as it also boasts a railway station and a nearby airport to the East of Carlisle.

Where to stay in Gretna

Whether you’re planning a wedding in the Gretna and Gretna Green area, or are curious to explore the Solway Firth and this historic town, we can offer some wonderful accommodation to cater for every need. Whether you prefer self-catering or a hotel stay, we can provide accommodation for all your requirements, so do take a look at our lists below.