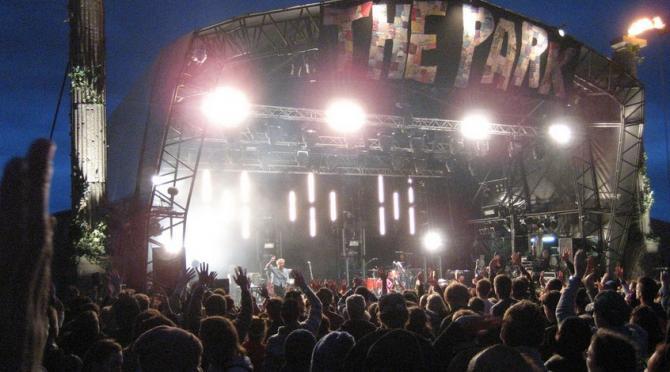 Glastonbury Festival attracts bands from all over the world and becomes a tented metropolis over a June Weekend. Demand for tickets today always outstrips demand. As soon as tickets go on sale via the website, usually Autumn/ October time for the following year’s event, they sell fast – literally in under two hours. Keep a close eye on when tickets are available to ensure your best chance of purchase. Returned tickets go on sale in the Spring. Find out more on the official Glastonbury Festival Website.

Glastonbury Festival started life as the Pilton Festival in 1970 after Eavis was inspired to hold his own festival after attending the Blues Festival at the Bath and West Showground. At that time the audience numbered 1,500 whereas it has mushroomed over the years to mammoth attendance. From its outset the Festival’s ethos was steeped in hippie and spiritual beliefs that go hand in hand with Glastonbury being a mythological centre in the Vale of Avalon.

There has always been a "green" living and campaigning focus to the event and this has not changed, although it is much more high profile now. The organisers of the Glastonbury Festival support Oxfam, Greenpeace and Wateraid, and the Festival is also seen as a positive force for local and international change. In 2005 Michael Eavis and Bob Geldof highlighted the "Make Poverty History" campaign on stage and 1,350,000 was raised for charities and good causes.

Not only has the Festival aimed to draw in big name bands such as David Bowie, Oasis, PJ Harvey, Massive Attack, Radiohead, Muse, Coldplay as well as some surprises over the years like Rolf Harris, Paul McCartney and Johnny Cash in 1994, but it’s had the reputation of breaking up and coming acts. It’s not all contemporary music though the multitude of stages also showcases dance, comedy, theatre, circus and cabaret acts.

There are multitude of stages and tents like the Acoustic Tent, Dance Village, JazzWorld Stage, and Kidz Field which are self explanatory as well as the John Peel Stage that showcases new and established bands performing new or different material and the Other Stage which is round the back of the Pyramid Stage where big name bands also perform.

The Pyramid Stage is the iconic focal point for Glasto and where the headlining bands play. It has had several forms over the years since it first appeared in 1971. Other tents and spaces are themed for folk and roots acts, poetry and prose, artistic activities and Left Field, the political conscience of the Festival, where you can debate issues, find out what action you can take and find out more about the ethics promoted by the Festival. The Green area is where you’ll find all sorts of complementary and alternative medicines and demonstrations of environmentally friendly technologies.

The annual sight of mud-caked festival-goers happily sploshing their way round show how the Festival atmosphere overcomes minor discomfort. The best advice is to go prepared for all weathers and layer up!