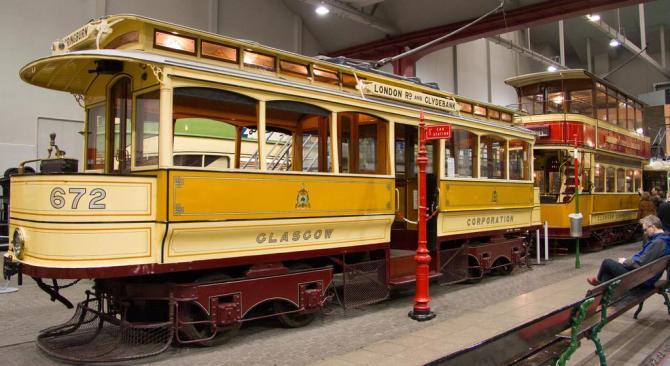 Glasgow tram at the museum

The Riverside Museum is multi-award winning tourist attraction and most recently was the recipient of first place in the 2013 European Museum of the Year awards. It is home to some 3,000 objects and wonderful displays – “the world’s finest cars, bicycles, ship models, trams and locomotives”, all housed within the most incredible modernistic museum setting.

The building itself, built on the site of what used to be the Inglis Shipyard on the North bank of the Clyde, is quite incredible and is also an award winner. Designed by female Iraqi architect Zaha Hadid, it cost £74 million to build.

The Tall Ship at Riverside

The Tall Ship at Riverside berths next to the museum. The name of the ship is the Glenlee and it was built at the Bay Yard in Port Glasgow, first taking to the water as a cargo carrier in 1896. The Glenlee is only one of 5 such sailing ships that still survive and are water-worthy. 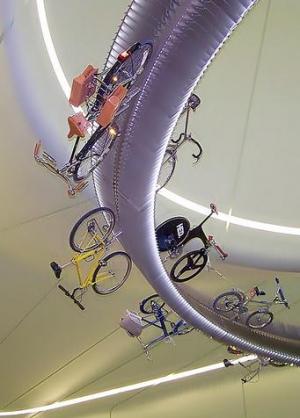 The museum itself displays and highlights many of the past glories of maritime Glagsow but is also interspersed with some odd and unexpected delights – a stormtrooper, prams, and paintings, to give just some examples.

Inside the museum’s stunning edifice three massively popular interactive streets have been created. Visitors can stroll through the streets and peer into shops which reflect Glasgow life from 1895 to the 1980s. These old fashioned street scene museums incorporate social history and the history of transport brilliantly, displaying vehicles along the way. From an Edwardian photographer’s studio to an Italian café and a 1960s garage, children of all ages will love exploring these exhibits.

Some of the exhibits are accessible via platforms so that visitors can really get inside them to feel how it would have been to use the vintage public transport, for example. How wonderful to sit inside an old tram! But other exhibits are a little more abstract – visitors can stand in another exhibit room underneath suspended displays of bicycles!

Many touchscreens and films give further depth to the story of the objects exhibited. Interactive and themed displays also bring life to the objects and the stories they tell. The themes chosen by the Riverside are Streets, the River Clyde, Transport and Leisure, Made in Scotland, Looks & Fashion, Crossing the World, Cutting Edge – Past, Present & Future, Disasters and Crashes and Getting There. For more information, see the website below – then click on Riverside.