History of the Crane

The Titan Crane, also known as Titan Clydebank, is now over 100 years old (it was built in 1907 at a cost of £24,000!) and was the largest electrically powered cantilever crane ever built at the time of its creation. It was the last crane to remain standing on the banks of the Clyde.

It measures an enormous 150 feet tall, is now capable of lifting 200 tonnes, and is a cantilever crane which was originally created to lift heavy items during the construction of battleships and ocean liners at John Brown’s Clydebank shipyards. It has taken its place in the construction of some very special ships too – for example, the Queen Mary, Queen Elizabeth, Lusitania and the QE2!

Falling into disuse in the 1980s, it became neglected and corroded, but its historical significance was soon rewarded when it was classed as a Category A historic structure, then extensively (and expensively) restored in 2005, ready for its debut as a tourist attraction in 2007!

Dubbed as Scotland’s "most unusual heritage visitor attraction", the crane has been specially adapted for visitors, fitted with floodlights for stunning night illumination, a lift for tourist passengers, emergency staircase and a mesh-floored viewing area. The crane’s renovation has spearheaded the gradual redevelopment of this once-active shipbuilding area.

Once in the loft level, don’t look down as the floor is just a metal grid! The Clydebank views are astonishing, as are the views inside the crane’s complex wheelhouse.

The crane has been awarded a number of landmark awards, and is now considered, in engineering circles, on a par with the Eiffel Tower. Also winning other awards for architecture and tourism (amongst others), the crane is the fifth designated engineering landmark in Scotland – the others being the Forth Rail Bridge, the Craigellachie Bridge (Aberlour), the Caledonian Canal and the Forth and Clyde Canal. 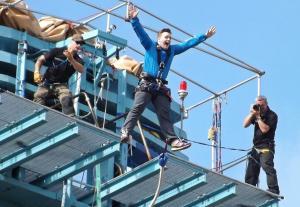 Bungee jumping at the Titan Crane

Popular with visitors who are just looking for a day out, and also for those with strong links to the Clyde’s shipbuilding past, this is a generally superb place to visit – why not take home a memento from the shop/museum or get a brew in the cafe…

This magnificent heritage tourist attraction is worth a visit in its own right, but also attracts fundraisers via bungee-jumping and abseiling events. And, sadly, the Titan Crane is all that remains of, and is a fitting tribute to, the John Brown Shipyard – and to the Clyde’s industrial past.