Glasgow city centre has an healthy number of sports venues – here are just a few:

This venue is used as both a sports arena and arts venue and stands opposite the Kelvingrove Art Gallery and Museum. Right next to the Kelvinhall subway station, this has attracted many events. In the past Kelvin Hall arena was also a thriving music venue but nowadays focuses on sports, especially athletics.

Built specially for the 2014 Commonwealth Games, this Parkhead situated arena, also known as the Emirates Arena, houses twelve badminton courts, three sports halls, and a 200m indoor athletics track. It is also used for basketball, and the velodrome has a 250 metre indoor cycling track.

This is Scotland’s national stadium and also hosts many cup and league cup matches, and as is the case with other large venues in Glasgow is playing a key role in the 2014 Commonwealth Games. Lesser Hampden stands next to it, home of the Queen’s Park Football Club.

The Ibrox Stadium is one of the largest football venues in Scotland, and is of course home to Rangers FC as well as occasionally standing in for Hampden Park to provide facilities for Scotland’s national squad. Glasgow’s Queen Street and Central stations are both around two miles away, and there is a subway station at Ibrox. It has a good bus service and is near to junction 23 of the M8.

In the Parkhead district, this is the home of Celtic Football Club, and is the largest football venue in Scotland. It has been used for national, cup final and international matches and has even hosted other unconventional sporting events in the earlier decades of the twentieth century. More recently it has been used as a high capacity venue for large concerts. 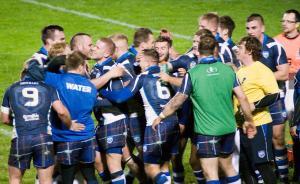 The home of Partick Thistle, this stadium in Maryhill, Glasgow has also hosted rugby league and union, and used to also be a greyhound track.

Close to the Maryhill station, and even closer to the subway stations at Kelvinbridgee and St George’s Cross, Firhill is also handy for the A81, a direct link from the M8.

Situated on Glasgow Green, it was constructed, like the Commonwealth Arena and Velodrome, specially for the 2014 Commonwealth Games, with two synthetic hockey pitches.

Host for swimming events at the 2014 Commonwealth Games, the Tollcross’s large 50 metre Olympic standard pool is backed up by the smaller warm-up pool.

This rugby union and athletics venue is in Glasgow’s West End, and is home to Glasgow Warriors, host to other national matches and a key training venue for the 2014 Commonwealth Games athletics.

Cricket: Hamilton Crescent, Partick, is where the West of Scotland Cricket Club play. Titwood, in Pollokshields is the home of the Clydesdale Cricket Club and the Glasgow home of the Scotland national cricket team.

Rugby: Glasgow’s rugby team the Hilhead Jordanhill RFC are based at Hughenden Stadium, and New Anniesland near to Jordanhill station also hosts rugby and cricket matches.

Football: Newlandsfield Park is home to Pollok FC, and is situated next to the Pollokshaws East station. Petershill Park leisure centre in Springburn has its own small stadium and outdoor pitch, and is home to two male and two female teams. 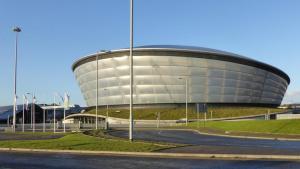 The Scottish Exhibition and Conference Centre, while not a sporting stadium as such, has hosted sports related shows and events, boxing matches, darts and snooker. The SSE Hydro, on the same site was built as a sport venue and has been earmarked for the 2014 Commonwealth Games gymnastics and netball events.

If you are coming to Glasgow to attend a sporting event, or even if you wish to pay homage to your sporting heroes, we can offer great accommodation (bed and breakfasts, hotels and apartments) within the city centre, so do take a look at our lists below. And, enjoy your stay in this very sporting city!