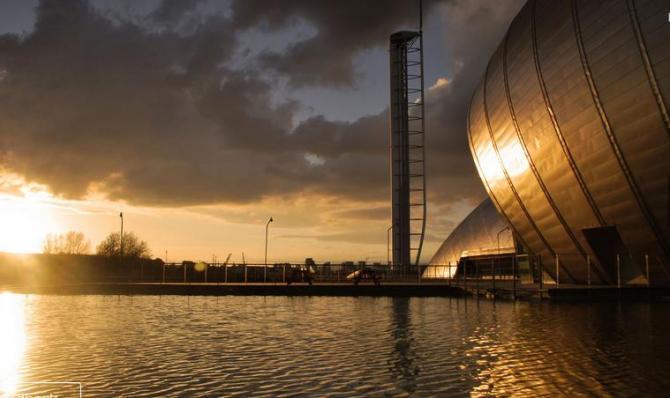 Glasgow Science Centre, situated in the Pacific Quay area of Glasgow, just off the M8, is a charity with a mission to educate in science. Like most major museums and educational centres, their exhibits are a balance between static permanent exhibitions and more fluid displays.

Resources for engaging the interest of children are available all over the site – from nursery activities right through primary and secondary interest exhibits. But there are also items of general interest – public exhibitions, shows, workshops and trails. Many of the scientific activities on offer are interactive and cover such topics as astronomy, chemistry and materials, energy, engineering, forensics, the human body, maths, the natural world and physics.

Part of the Science Centre, Glasgow Tower stands at 127 metres high and is the only fully rotating building in the world. It reopens in the Summer of 2014 to allow visitors to view panoramic views of the city.

The IMAX cinema situated on the site next to the main Science Centre building, shows educational films of about 45 minutes in length – examples include Space Station, Born to be Wild, Under the Sea and Hubble – all 3D.

Always a great experience for children and adults alike, the IMAX is a major pull for visitors, but the main attractions of Glasgow Science Centre are largely located within the three floors of the interactive science mall.

Of particular interest to many visitors might be the Planetarium shows, one show being particularly suitable for those under six years of age, and the BodyWorks exhibit, opened in March 2013. BodyWorks cost £2 million to create and displays 115 interactive exhibits, research capsules and live lab experiences. The aim of the exhibition is the exploration of the science which underpins health and wellbeing, showcasing research and innovation. It is hoped this will educate visitors with the awareness to consider their bodies from a new perspective. Other zones within the science mall offer a great deal of educational fun with the likes of plasma balls and chaos pendulums.

Whitelee Windfarm, an associated site situated around twenty minutes from Glasgow Centre, also runs science-related fun and educational activities. Do check on their website if you’re considering making the trip though, as the facility is closed over the Winter months.