Glasgow is well known as a city of festivals with an enormous almost year-long programme of exciting events.

Celtic Connections is an annual Winter music festival celebrating roots, folk and world music with Celtic connections worldwide. Over 2,000 musicians regularly perform over 2-3 weeks and the festival also hosts talks, workshops and other events. It has been running special one-off, often collaborative events for many years now and even takes visiting performers to other locations, including the Isle of Skye and the Ryder Cup.

Glasgow’s Jazz Festival has been held annually since 1987 and has brought some big names to the city for its yearly early Summer celebration of all things jazz. The Scottish Acoustic Festival is a new festival all about acoustic music and the Piping Live Festival in association with the World Pipe Band Championships is held in Glasgow too. 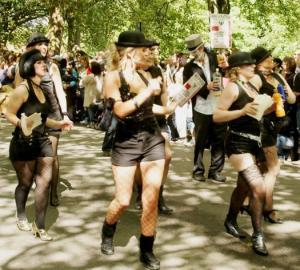 Of course, Hogmany in Glasgow is as important as it is in any other Scottish city, but here it takes the form of a week-long celebration incorporating, according to their website: "Celidhs to Comedy. Dining to Dancing. Music to Movies. Parties to Pantos. Skating to Shopping. The Choice is Yours". Fantastic to cheer you up in the cold Winter months, but Glasgow cultural festivals don’t begin and end with Glasgow on Ice and Hogmany…

Glasgow’s West End Festival is the ‘festival that thinks it’s a fiesta’ incorporating many activities and projects. Glasgow’s Science Festival hosts a very wide range of events connected with science, engineering and discovery, and the Glasgow Mela at Kelvingrove Park is Scotland’s biggest multicultural festival. Both the latter events are usually held in early Summer.

There’s also the Glasgow International Festival of Contemporary Visual Arts for lovers of the innovative; and the Glasgow Open House Art Festival and the Glasgow Art Fair to consider as well as many others too numerous to relate here, including the Merchant City Festival held each Summer and the Southside Festival (music and art festival held in May).

Powerboat at the River Festival

Other Festivals to Note

The fascinating Doors Open Day festival allows access into otherwise inaccessible often quite private buildings, while the equally fascinating Govan Fair (going since 1756 and always held on the first Friday of June) celebrates Govan’s history and tradition, with events, parade and family focused entertainment. Other local fairs come and go all the time, so just keep an eye out in the local press.

Glasgow’s River Festival encourages family fun, tall ships, water cruises, water based sports and displays and much more. Generally held in July, it is a friendly and vibrant festival and well worth a visit. And the Glasgow International Comedy Festival is an annual Spring festival of all things funny, has been running since 2003 and is very popular with locals and tourists alike. As is Aye Write! – a Springtime book festival.

Or, for the LGBT community and those who just enjoy a good celebration, try Glasgay (a massive two month long celebration using all the mediums – art ,theatre, cinema, spoken word etc) or revel at Glasgow Pride, held each March.