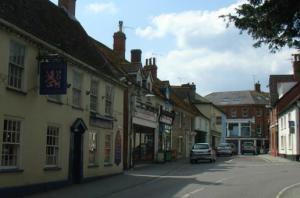 Gillingham is a town in the Blackmore Vale area of Dorset and is the county’s most northerly town located close to the Somerset and Wiltshire borders. It’s a great base for touring by road and rail. You can pick up train links from Gillingham station to Sherborne, Salisbury and beyond. Gillingham hosts several popular festivals over the summer. The Gillingham & Shaftesbury Agricultural Show is a great day out for all the family with a traditional cattle show, various stalls, competitions and events. The Gillingham Festival is an annual arts festival with live music, theatre, dance, exhibitions, food and wine, antique valuations, open gardens and classic cars on display. Accommodation in the area includes traditional B&Bs and fine old inns with rooms. You’ll also find a wide choice of country cottages around the town.

There has been a settlement at Gillingham since 2500 BC. Just a mile to the north west of the town is Longbury Barrow – an ancient burial mound dating from the Neolithic period. The Romans also settled here and all sorts of artefacts have been found around the town and are displayed in the town museum. However, it was really a Saxon stronghold from which the name is derived meaning "homestead of the followers of Gylla". Gillingham’s church, St Mary the Virgin’s Church, has several Saxon features including a cross shaft dating from the ninth century. Other historic buildings include the Tudor Wyke Hall which along with the church is the oldest building in the town. Gillingham was also the seat of a royal hunting lodge in the Middle Ages used by Henry I, Henry II, Henry III, and King John. The lodge was destroyed by Edward III in 1369 after it fell into disrepair. From 1769 Gillingham developed as a mill town for silk. The town flourished with the coming of the railway in the nineteenth century and a variety of industries have supported the town including glove making, brickmaking, cheese production and printing.

Gillingham Museum was founded in 1953 to house the Freame family’s collection of historic documents and artefacts. The museum is now within a modern purpose built extension to the library and houses a range of collections including geological specimens and artefacts dating from the Iron Age, and the Roman and Saxon periods. The arrival of the railway is also detailed in exhibits and there is a reconstruction of a Victorian parlour. Highlights amongst the collection include a series of sketches and reproductions of paintings that John Constable did of Gillingham. The original Constable painting of "Old Gillingham Bridge" is in the Tate Gallery in London.