The West Wight area is home to beautiful beaches and the lovely Victorian town of Freshwater close to Alum Bay and The Needles rocks with the famous chairlift ride. The area offers a range of outdoor activities including an 18 hole golf course, bird-watching and estuary walks. There are plenty of cliff top walks to enjoy including the Tennyson Trail to The Needles or try your hand at windsurfing at Compton Bay. Sandy Totland Bay is a popular beach with families. Follow the River Yar south from Yarmouth and you’ll come to Freshwater. It’s a large village with a good choice of shops. Continue south and you’ll come to the perfectly arched Freshwater Bay. Freshwater Bay is a cove fringed by a long sandy south-facing beach.

The Downs above Freshwater Bay are named after one of the island’s most famous residents, Alfred Lord Tennyson. He used to live in Farringford which is now run as a hotel. Tennyson and his wife spent many years at Freshwater, particularly in the winter. St Agnes Church, the only thatched church on the island, is built on land donated by the Tenysons. During the forty years that Tennyson spent in Freshwater many famous guests were invited to stay including Edward Lear and Sir John Everett Millais, Lewis Carroll, photographer Julia Margaret Cameron, Garibaldi, Charles Darwin, George Frederick Watts, Bishop Wilberforce and William Holman Hunt. You can pick up the Tennyson walking Trail from Freshwater Bay. The route takes you up onto the hills above the bay, heading west to the Tennyson Monument and The Needles.

Freshwater Bay Golf Club is located just east of Freshwater Bay. It’s set on the downlands overlooking the English Channel. The course is an 18 hole links course with a par 68. The Club works closely with the National Trust and conservation organisations to enhance the management of the golf course to benefit wildlife. The grassland is particularly special and includes a variety of flowers some of which only occur in the chalk grassland on the Isle of Wight. Visitors are warmly welcomed. 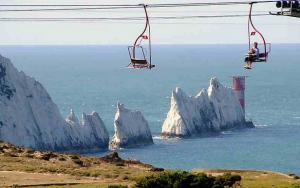 Spectacular views of The Needles from the famous chairlift

Generations of families will have fond memories of Needles Park at Alum Bay with the iconic chairlift ride down to the beach featuring spectacular views of Alum Bay, the Needles rocks and lighthouse en-route. Today’s collection of fun family attractions at the park include a 4D cinema experience, a wide range of quirky gift shops, a 9 hole golf course, fun themed rides, the famous sand shop with unique coloured sands gifts and a traditional carousel. A choice of eateries from family restaurants to tea rooms and ice cream takeways are on-site and for best panoramic views of Alum Bay, The Needles Rocks and Lighthouse hop aboard a boat trip with Needles Pleasure Cruises.

Couples and families will find an outstanding choice of accommodation in and around Freshwater including some luxurious holiday homes, lodges, apartments and cottages available at affordable prices. Many boast magnificent sea views and accommodation for large groups features strongly in the area – ideal for extended family groups and activity groups. No need to leave the family pet behind – you’ll find a good choice of pet friendly accommodation with plenty of garden space around Freshwater all close to Heritage Coast trails.