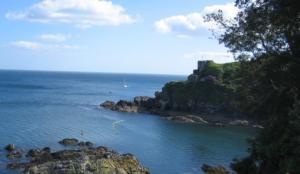 Great for walkers as well as watersports and sailing fans, Fowey on the South Cornwall coast sits adjacent to the Saints Way which winds up towards Padstow on the north coast. You can also head off along the South West Coast Path up from Readymoney Beach on the town’s outskirts. Fowey contains beautiful cove beaches like Readymoney, a popular beach for bathing with author Daphne Du Maurier who lived nearby. Fowey’s enchanting town centre with pretty main Fore Street and a network of narrow streets is packed with tearooms, craft shops and old inns, and Fowey has a stunning historic harbour where you can pick up a wide choice of boat trips. A visit to the little Fowey Museum near the harbour is not to be missed, housed in one of the town’s oldest buildings dating from the 15th century. Fascinating artefacts explore the history of the harbour, literary and maritime heritage, and you’ll learn all about the plunders of the Fowey Gallants here!

Explore the estuary and coastline and book a Fowey canoe or boat trip. Wind in the Willows river trips are inspired by Kenneth Grahame’s novel of the same name. The town sits within an Area of Outstanding Natural Beauty and is a top spot for foodie lovers – Fowey River Mussels are a delicacy in the area and the centre contains a wide choice of bistros, old inns, fine restaurants and cafes serving up best local Cornish produce. Fowey’s Royal Regatta annually in August attracts huge crowds, or visit in December, and enjoy the Fowey Christmas Market. It’s an annual two day event that starts with a Christmas BBQ accompanied by festive music, and includes stalls, a procession and the official Christmas light switch-on. There are carol performances, Christmas nativity plays and the Hog Roast, as well as live entertainment in many Fowey pubs. 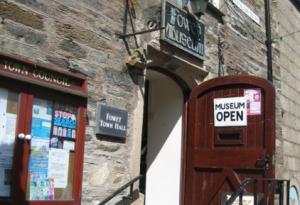 St Catherine’s Castle ruins at the headland point overlooking the estuary are easily reached via the coast path from Fowey centre, up from Readymoney Beach. Another local castle situated just outside Fowey near Lostwithiel is Restormel Castle. It’s a typical motte and bailey castle built around 1100 with a deep moat around it. Visit the aquarium situated under the Town Hall on Town Quay or laze on Fowey Quay and enjoy a choice of cafes, real ale pubs, arts and crafts shops and stalls. Take a boat trip – there’s a wide choice of trips to nearby villages or up the estuary to Lostwithiel and further up the coast to picture postcard Mevagissey fishing village around St Austell Bay.

Fowey’s Royal Regatta takes place in Mid August (usually the third full week) annually, and is a superb sailing event with lots going on, not just on the water, but on land as well. Many of the events are free, and great for families. These include firework displays on the Quay, Red Arrow Displays, Raft Races, activities for kids, Grand Draws and Carnival Processions. Live music is also hosted on the town’s quay. Daily sailing races range from full on cruiser racing, to children’s dinghy races. All the key sailing organisations, including Fowey Yacht Club and Fowey Gallants Sailing Club, are involved.

Take your pick of boat trips from Fowey across the estuary to Polruan, or in the peak summer season hop aboard the ferry service from Fowey to Mevagissey, taking in beautiful coastal views of Readymoney Beach, St Catherine’s Point and the remains of St Catherine’s Castle along the way! Fowey River and Sea Cruises offer a choice of boat trips which include a 45 minute tour of the harbour, boat trips to nearby Georgian town Charlestown once a centre for China Clay export, and leisurely boat trips to beautiful historic fishing village Polperro, just 6 miles east of Fowey. Alternatively turn inwards up the estuary river to Lostwithiel where, when you arrive, you can join a guided walk around this historic Cornish town.

Fowey Water Taxi services operate from May to September making it easy to move around the estuary, with services including the Polruan Ferry running between Polruan Quay and Fowey or Whitehouse Quay. The Bodinnick Car & Passenger Ferry runs between Caffa Mill and Bodinnick Slipways, and across the summer season around 4 to 6 ferries operate to and from Mevagissey pushing across St Austell Bay, and landing at Whitehouse Quay.

A selection of beautiful villages like Polruan, Bodinnick and Point surround Fowey and a great way to explore them is via the Hall Walk, a circular trail which pushes around the lower harbour. There are also coastal strolls around Gribbin and Lantic Bay and pretty riverside walks around Lerryn and Lostwithiel. Pick up leaflets or book a guided walk at Fowey’s central tourist information centre.

Fowey beaches include Whitehouse Beach located just off the esplanade, only a 5 to 10 minute stroll from the centre. One of the town’s most popular beaches is Readymoney Cove Beach situated at the estuary mouth close to St Catherine’s Point and Castle. More sheltered beach bays sit west of Fowey including hidden gem Polridmouth Beach and Polkerris. Fowey is surrounded by some of Cornwall’s best family friendly beach bays around St Austell Bay just to the west such as Par Sands.