Pembrokeshire’s Fishguard, and its close neighbour Goodwick, are two of the finest holiday destinations on the North Pembrokeshire coast, picturesquely situated where the River Gwaun joins the sea. 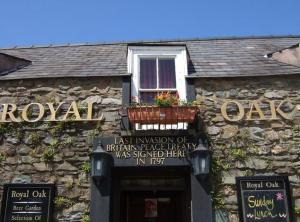 Fishguard is in many ways a traditional fishing village, with tidal quay, an old harbour and quayside cottages in the lower town. The main town sits atop the neighbouring cliff (along with Fishtown Fort, its cannons and superb viewpoint). The town itself has great facilities for the visitor, with a handy market hall, craft shops, and pubs. One very notable pub, the Royal Oak, was the location of the surrender of the French invasion forces. This, the final mainland invasion of Britain, called The Battle of Fishguard (1797), is commemorated in a tapestry in the town hall.

The town’s charms have not gone unnoticed further afield – it featured in Richard Burton’s version of Dylan Thomas’s ‘Under Milk Wood’, in which many local people played extras. Also, Moby Dick was filmed here in the 1950s.

Bays and Beaches – Second Best Coastal Destination in the World!

The beaches around Fishguard Bay, Newport Bay and St Brides Bay are truly exceptional, in fact, the Fishguard beaches have been described (by National Geographic, no less) as the second best in the world, beating Costa Rica, Bermuda and the Seychelles! The two main beaches are Slade (tiny but stunning) and Goodwick Sands, which is a sheltered sand and shingle beach, safe for bathers, with play areas, toilets and refreshment facilities.

Located in the town hall, the 100-ft-long tapestry has been favourably compared to its French counterpart, the Bayeux Tapestry. Commissioned in 1997, it attracts many visitors and commemorates the bicentenary of the Last Invasion of Britain – by the French.

Fishguard’s festival runs for a week for masses of live classical and contemporary music. The village also has held a folk music festival since 1999. 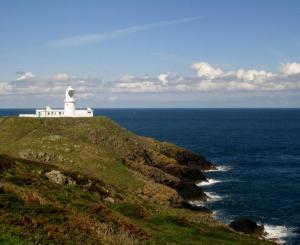 This area is a spectacular location for an outdoors holiday as the Pembrokeshire Coast Path passes by. The Fishguard Marine Walk, offering views of sea and harbour, is very popular, as are wildlife watching (for coastal birds, grey seals and even dolphins), coastal walking, coarse and sea fishing, and golf. The coastal path’s scenic attractions include Carreg Wastad point and Strumble Head lighthouse.

Stena Line runs a regular short, fast crossing to Rosslare in Ireland. In fact, Ireland is nearer Fishguard than England is!

Fishguard and Goodwick railway station runs regular services made use of by the many visitors. Transport by road is via the A40 from the South (Haverfordwest) or the A487 from the North (Newport).

Fishguard’s charms are certainly reflected in the quality of the holiday accommodation we are proud to offer. Mainly self-catering holiday cottages, we do also offer some guest houses and pubs/hotels, many of which are pet and family friendly, making this a lovely location for a family holiday, so take a look at our lists below.