Fetlar, six miles by five miles wide, is the most fertile of the Northern islands of Shetland. In fact Fetlar means "the island of the fat land" in Old Norse and this is the reason why the Vikings colonised the island 1,200 years ago. Being so green it’s been tagged as the "Garden of Shetland" but don’t go expecting cultivated gardens as it’s much more that it’s green and grassy with flowering meadows in the summer and grassy moorlands and bogs in the higher ground. With fine coastal views and beaches alive with summer flowers and birdlife.

The main and central village on Fetlar is Houbie, which is where you’ll find the post office, shop and cafe. Fetlar suffered greatly in the Highland Clearances but has been inhabited for over 5,000 years and there is archaeological evidence of Stone Age, Pict and Norse settlement.

Today the island is home to 100 people and Britain’s most important breeding population of Red necked phalarope. Around the coast and lochs you can also catch glimpses of seals and otters making it a wonderful place to do more Shetland exploring on foot. The North and Eastern part of Fetlar is largely owned by the RSPB who manage it as a nature reserve.

The coastline along Funzie Bay is the most picturesque where you can look down into the bay and see the variety of stacks and jagged cliffs. There are also sea lochs where otters are sometimes seen. Over to the east of Houbie is Tresta beach, a pretty, sandy beach in a bay where you can find graphite pebbles – try writing with them. The headland to the south of Trestam Lambhoga, was where the islanders once dug peat for fuel. It now makes a nice long walk where you’ll see thousands of puffins nesting between late April and early August. 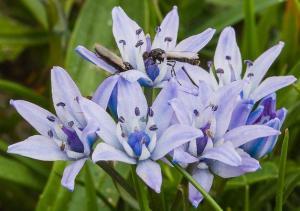 There are a range of ancient archaeological sites dotted all over Fetlar which attracted The Time Team in 2002. Two sites were excavated – at Gord Garden in Houbie, a Norse house and artefacts were discovered; and a Viking boat found at Aith. Other sites include Finnigert Dyke which is probably Fetlar’s oldest surviving man made structure. Near here is the ancient ring of stones, Da Haltadans. Legend tells that the two rocks in the middle are a fiddler and his wife who were entertaining a group of trolls dancing in a circle when the sun came up and turned them all to stone.

More recent attractions include two lairds’ houses: Brough Lodge and Leagarth House. The former was built around 1820 for the Nicolson family of lairds who were responsible for giving the crofters forty days notice to quit their land in the nineteenth century Clearances. The eccentric Sir Arthur Nicolson largely rebuilt it in a rambling mix of architectural styles together with the folly built on the site of an Iron Age broch using stone taken from abandoned crofthouses – talk about adding insult to injury.

Leagarth House is a more conservative affair built in 1900 by Sir William Watson Cheyne, Fetlar’s most famous son who became Lord Lister’s assistant in his pioneering work identifying the need for and developing antiseptic surgery in the late nineteenth century. The Fetlar Interpretive Centre in Houbie details Cheyne’s life and works as well as providing information on the island’s birdlife and archaeological excavations. The Centre was used as the base of operations for the Time Team’s dig in 2002.