Farnborough sits in the far north east corner of Hampshire on the border with Surrey. It falls within the Rushmoor area flanking the county boundary, along with Aldershot and the River Blackwater. Despite its modern appearance it is actually an old village founded by the Saxons. The old part of Farnborough is centred around Farnborough Street. The town grew in conjunction with the growth of the military camp at Aldershot. The Royal Aircraft Establishment based in Farnborough brought more prestige and the town developed into a UK centre for aviation research and development. Saint Michael’s Abbey, a Benedictine abbey is also located in the town and open to visitors. It was founded in 1881 by Empress Eugenie, wife of the nineteenth century French Emperor. 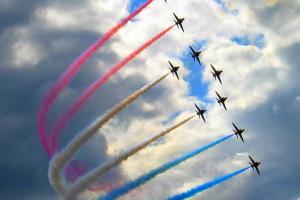 The Red Arrows at Farnborough Airshow

Farnborough is internationally renowned for the Farnborough Airshow which is held every two years at the Farnborough Airfield. In fact, Farnborough was the location of the first British powered flight by American Samuel Franklin Cody. You can find out more about this flamboyant character at the Aldershot Military Museum. The highlight of the Farnborough Air Show is the aerobatic and flying displays of historic and modern aircraft as well as the stunning displays by the Red Arrows. The show also serves as an international trade fair for the aviation industry and features exhibition halls and an outdoor aircraft exhibition. It lasts for seven days and is open to the public on the last two days.