Fair Isle, situated in the Atlantic 25 miles between the Orkneys and the Shetlands, is three miles long and a mile-and-a-half wide with a population of way less than 100. With changeable weather and potentially bumpy ferry journeys that aren’t for the faint hearted, its high West coast cliffs combine with the fertile South and Northern moors… Small and isolated, Fair Isle’s famous for its migratory bird visitors and its internationally renowned Bird Observatory.

First inhabited over 5,000 years ago in Neolithic times, the island is now owned by the National Trust for Scotland. Some archaeological remains are still visible on the island including oval-shaped stone houses around 3,000 years old as well as stone walls and dykes. The "Feely Dyke" is a (probably prehistoric) turf rampart that divides the common grazings from the crofts. Burnt mounds are also interesting archaeological remains made up of blackened stones that would have been heated in a fire and then dropped into water to heat it.

There are 14 scheduled monuments on Fair Isle including these archaeological remains and remains of a World War II radar station. The island’s two lighthouses are also listed buildings. 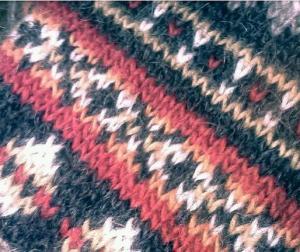 The people of the Fair Isles do keep up their traditional skills of boat building, glass and stained glass production, straw-backed chairs, felt and fiddles and of course the delicate lace and colourful knitted Fair Isle jumper.

Created using fine stranded yarns, the end result is warm and lightweight garments which have traditionally been used in trade with passing ships in exchange for supplies.The Shetland Museum on Mainland has a collection of Fair Isle knitted garments, scarves, hats and items from the early 20th century.

Fair Isle is a fantastic place for wildlife spotting. Not only are the cliffs alive with thousands of fulmars, kittiwakes razorbills, guillemots, black guillemots and puffins from April to August, but the moorland is alive with skuas and terns who nest here over the Summer. Anyone venturing out there will need to be prepared to be dive-bombed. Grey and common seals are often seen around the island and harbour porpoises, dolphins and whales pop up in Summer, sometimes seen from the ferry on the way over.

A range of habitats including heather moorland, marsh, wetlands and cliffs come alive with flowers from late May over the Summer. The island boats a list of over 250 flowering species, several of which are rare. If you time your visit right you might be lucky enough to see heath-spotted orchid and prostrate juniper within the moorland, bog asphodel, early marsh orchid, black bog rush and butterwort in the mires and marshy areas and Shetland red campion, thrift, moonwort, frog orchid and spring squill on the cliffs and in the coastal grassland.

Set up in 1948, the observatory studies migration in relation to the marine environment. Many birds live or migrate nearby – Lanceolated warbler, Pallas’s Grasshopper Warbler and Yellow-breasted bunting, for example, and the best time to visit is either at the end of September or late May.

Fair Isle is a very environmentally aware community that produces its own electricity from wind turbines that produce most of its energy requirements.