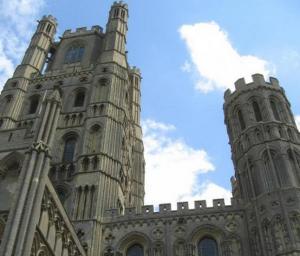 Like the great flat Fens landscape, a visit to Ely Cathedral is a memory that lingers. Ely Cathedral regularly features in Top Ten lists of ‘must visit’ buildings in Britain. This is a building that inspired the young Christopher Wren and the Victorian Gothic revivalist A.W.N. Pugin.

Largely Norman with magnificent medieval paintings and carvings and fine Victorian restoration work by architects like George Gilbert Scott, this iconic landmark in the Cambridgeshire Fens is essential visiting. Ely Cathedral has the nickname ‘The Ship of the Fens’ because this magnificent Norman cathedral is visible on the flat Fens landscape from miles around, ‘riding the sky like a great ship’. 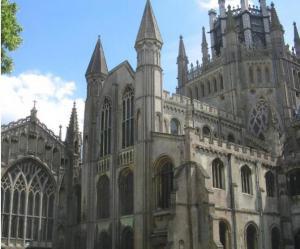 Ely Cathedral dates from the earliest period of Christianity in Britain and contains spectacular Norman architecture, intricate carvings and medieval paintings. The cathedral was founded on the Isle of Ely by Saxon princess Etheldreda, daughter of Anna, King of the East Angles. Sculptures in the pillars of the Octagon inside the Cathedral tell the story of Etheldreda and her flight from an unhappy second marriage the founding of a monastery here in AD673.

This was a few years before the Lindisfarne Gospels were written between AD698 to 721. Etheldreda’s image is present all around the Cathedrll in not just the Octagon pillar sculptures but also in a window over the West Door. A slate stone slab marks the spot where Etheldreda’s shrine, once the site of pilgrimage, was.

Etheldreda’s church was obliterated by the Vikings in 869. The spectacular Ely Cathedral you see today is mostly Norman, built by Norman master builders from around 1081 to 1189 to reflect not just the glory of God, but also as a mighty statement of Norman power. The nave and transepts are distinctly Romanesque. The pointed arches at the tops are early Gothic. The Victorian restoration of Ely Cathedral, unlike some Victorian restorations, is sympathetically done. Eminent Victorian architects like George Gilbert Scott, influenced by Pugin, were involved in the Victorian restoration which included the paintings of the Nave Panels. 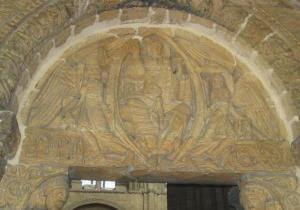 Intricate carvings around The Prior’s Door

The surviving Monastic buildings at Ely are the largest collection of medieval monastic buildings in Europe still in domestic use despite much being destroyed during the reformation. Other architectural highlights include the Early English style Galilee Porch, the vast 12th century West Tower and the carvings on the Prior’s Door, a former entrance to the cathedral. The Octagon is a marvel of medieval engineering featuring Alan of Walsingham’s octagonal lantern.

Guided tours of the Catheral are included in admission and for a small additional fee you can get up close to The Octagon via an Octagon Towers Tour which takes in the 14th century painted Octagon ceiling by John of Burwell. Cathedral tours are well worth dipping into as there is much to see and admire within and it’s easy to miss the location of some of Ely Cathedral’s treasures like the engravings on the Prior’s Door or the famous Green Man Carving. 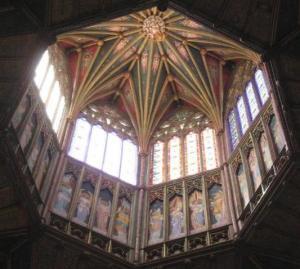