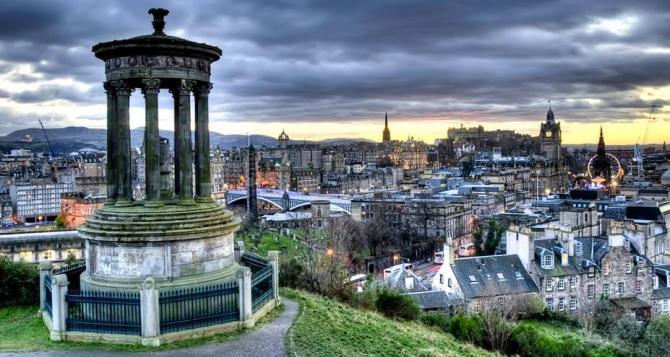 Edinburgh, Scotland’s capital, to the South of the Firth of Forth, is situated to the South East of the country, just before Scotland’s ‘waist’. It is only a short trip along the M8 to Glasgow (Scotland’s most populous city), and has a well-deserved reputation as a wonderful destination for a city break.

Edinburgh is bustling yet refined, energetic yet packed with solemn history… Its name implies a hill fort at a place called Eidyn, and there are signs of habitation here back to Mesolithic times (in Cramond), and from the Bronze and Iron Age, elsewhere. It has been a royal burgh since the twelfth century and when expansion was required in the seventeenth century, the town walls were already in place, so expansion continued upwards – some buildings ended up being eleven storeys high!

Its history of brewing and distilling, printing, engineering and rubber production has given way in part to the booming financial/administrative, business/technology sectors, and of course tourism.

What visitors come to Edinburgh for are its countless tourist attractions, its refined yet rugged history, the spectacular architecture, the Forth Road Bridge, and to soak up the culture. Edinburgh is largely split into old and new towns, divided at Princes Street. Both are World Heritage Sites and there are also 4,500 listed buildings in Edinburgh – more than anywhere else!

The city’s galleries, museums and festivals attract many visitors but Edinburgh is also blessed with many wonderful shopping areas in and out of the city, and is chock-a-block with good places to eat, drink and be entertained.

The old town runs towards Holyrood Palace, being to the South and East of the city. Incorporating the Grassmarket, the Royal Mile, Greyfriars Kirkyard and the Castle, this part of Edinburgh has an historic charm, but also used to be so densely populated that vaults underneath the city were inhabited by the city’s newcomer workers.

The new town, to the North and East, was designed via an eighteenth century competition to help crowded Edinburgh accommodate its population. The grid pattern, flanked to the North by George Street also includes Princes Street and Queen Street – the main shopping areas. It is separated from the old town by The Mound which now houses the National Gallery of Scotland and Royal Scottish Academy buildings. 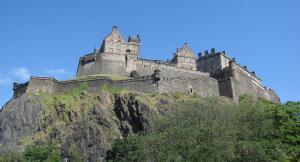 Built on Castle Rock, Edinburgh Castle dominates the cityscape, whether by day or night. There’s been a castle on this perfect fortress site since the twelfth century. Edinburgh’s oldest building, early twelfth century St Margaret’s Chapel, lies within the castle. It is also the site of the National War Museum, and it is one of the best-loved tourist attractions in the UK, as well as backdrop to the Edinburgh Military Tattoo.

Oh, and by the way, Auld Reekie, a description of the awful fumes from smoky coal fires so prevalent in Edinburgh’s history, is no longer an appropriate name owing to clean air acts! Nevertheless it is still used as an affectionate nickname for Edinburgh today!

Leith, Edinburgh’s port is now a major shopping and leisure area and the Royal Yacht Britannia is moored here as a permanent visitor attraction.

Edinburgh is easily reached from the main motorway network, via the M8 from Glasgow, to the M90 Northwards, and a whole network Southwards. Edinburgh’s two major stations (Waverley and Haymarket) are well-used and the airport to the West of the city includes all the facilities you’d expect from an international airport.

We are proud to offer the visitor to Scotland’s capital some incredible places to stay – contemporary with castle views, affordable, luxurious…. Whatever your budget or requirements we’re sure you’ll find something to suit within our listings, so do take a look below.