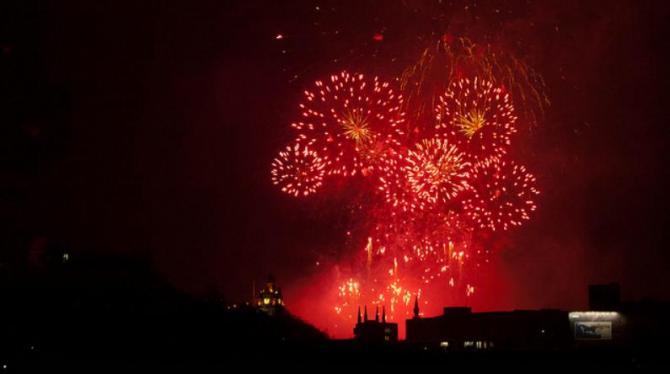 Hogmany, the crossover of the outgoing old year and the incoming new year, is celebrated on 31st December. Great enthusiasm and energy goes into Hogmany events run by most of Scotland’s cities and towns, but Edinburgh’s Hogmany celebrations are rather special.

Each year, people throng the Wintry streets of Edinburgh for street parties, and during this time many of the streets around the castle, Princes Street and the Waverley train station are closed to allow safety and control of the crowds, and to prevent to admittance of non-ticket-holders. Not an experience for the crowd-phobic or faint-hearted, the city’s revellers are nevertheless not intimidating. Edinburgh’s Hogmany celebrations are a feel-good experience, generally encompassing up to three days of events.

Of course, local venues themselves will hold Hogmany events, but the normal life of some of the city streets and parks is put on hold for these major events. The main event, Edinburgh’s Hogmany Street Party, is a ticketed party which includes two music stages, the Waverley Stage and the Scottish Stage. An outdoor event, it nevertheless has controlled access for admittance, but does have bars and food outlets on the streets within the arena site. Also, temporary event toilets are erected throughout the area.

Throughout the three days of previous Hogmany events, the Edinburgh Wheel was positioned right next to Waverley railway station, to allow high-up viewing of the city, and the Hogmany Carnival was held close by in the Market Street area.

The 30th December generally sees a torchlight procession from George IV Bridge to Calton Hill. On the 31st December itself a Candlelit Concert might be held at St Giles’ Cathedral, then a street party which includes Concert in the Gardens (West Princes Street Gardens). Previous performers have included The Pet Shop Boys.

The Kelidh site is usually positioned next to the National Gallery of Scotland and features music from such well respected figures as the legendary piper Hugh MacDiarmid’s Haircut. The main arena stage, the Waverley Stage which is erected close to the railway station, stages the main musical acts but other stages and events throughout the city will combine to provide an incredibly friendly party atmosphere, topped off by the spectacular Midnight Fireworks display.

Around 80,000 people celebrate each year against the backdrop of Edinburgh Castle, and with live music and entertainment, DJs, giant screens, outdoor bars, food and drink and fireworks, the Edinburgh Hogmany celebrations have something for everyone.

The latest information can be found at


Where to stay for Hogmany in Edinburgh

As you can imagine, the Edinburgh Hogmany Celebrations are very popular amongst residents within the city, but also attract many tourists from surrounding areas and much further afield. Beat the rush by checking out our offers below, not just for city centre accommodation, but for places to stay on the outskirts We can offer a large variety of accommodation to suit all purses and tastes.