Edinburgh’s Castle isn’t only one of its best known landmarks, and most visited tourist attractions, it is also probably Scotland’s best known historic fortress, iconic and imposing, seated at the top of the old town and perched on Castle Rock (a now-extinct volcano). The castle is way up on the list of Scotland’s most popular paid-for visitor attractions, but even amongst those who are unable to visit in person, it is still well known and loved. In fact, the castle’s fame has spread worldwide as it is the backdrop to the spectacular Edinburgh Military Tattoo (which takes place during the Edinburgh International Festival), an event which is screened onto televisions all over the world. 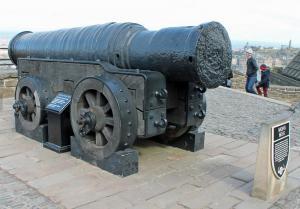 There have been human settlements in this area since the Iron Age and a castle here since the twelfth century. The castle has played its part in many conflicts (as you’d expect from a fortress of this magnitude), from the fourteenth century Wars of Scottish Independence to the eighteenth century Jacobite Rising.

St Margaret’s Chapel, a simple building within the castle is probably the oldest building in Edinburgh, and still remains, standing and available for church ceremonies. But it isn’t just the Chapel that’s of interest – the whole site is fascinating, from the regimental museums to Mons Meg (a fifteenth century siege gun), the Military mascots, the re-enactments and actors in costume, the Royal Palace, the Great Hall, the Scottish National War Memorial, the exhibits in the National War Museum of Scotland, and so much more…


No written description can adequately describe the grandeur and sense of history in the castle. There’s only one way to understand how powerful Edinburgh Castle is – to visit it soon!


It includes blogs, listings of events, details of the castle’s history, instructions on how to plan your visit, how to get the best out of explorations of the castle, and even details of how to hire parts of it.

From accommodation overlooking Edinburgh’s glorious castle, to more tucked away properties in the suburbs or cottages in the surrounding countryside, we have something to suit all tastes and requirements for visitors to Edinburgh. Take a look through our listings and book that long-awaited stay in Edinburgh’s capital very soon. With so much to do and see in Edinburgh, you won’t be sorry!