Great Newsome Brewery Beers on Display at RHEX 14 in Italy

East Yorkshire is one of those hidden gem corners in the UK for best real ales, beers and ciders. The region has its own CAMRA association based in Hull, several award-winning breweries and hosts a number of first class beer festivals.

East Riding and Wolds beers have been making a name for themselves on the international beer scene in recent times! Beers from the Great Newsome Brewery near Withersea on the East Riding Coast have been wowing Italian beer fans at expos across Italy for which they are an official import partner. Their Frothingham Best is a World Beer Award-winner and a member of the National Trust Beer Club.

The Wold Top Brewery near Hunmanby, main bar sponsor for this year’s Bridlington Beer Festival, is ‘Wold Famous’, boasting a string of awards and also finding favour amongst the Italians. The names of their fine ales are inspired by local places in the Yorkshire Wolds and the family behind the brewery have been farming 600 acres of land in the Wolds for generations.

If you’re a real ale lover on the lookout for a perfect events or wedding venue, you’ll find no better than The Wold Top Brewery’s ‘Muddy Souls’ venue at Hunmanby Grange with events including your very own beer label and pump clip! 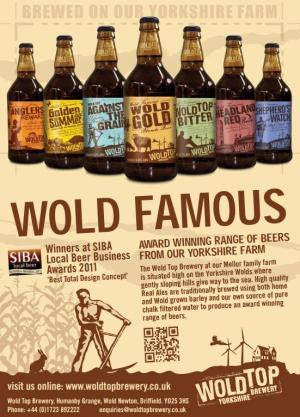 It’s Spring and beer is in the air in East Yorkshire, with several great beer festivals taking place across March and April annually. Kicking off the season is the Hull Ionians Beer Festival (their very first one) on 1st March (starts 12pm) at Brantingham Park in Elloughton, the home of Hull Ionians RURC. Guest beers from Great Newsome and Wold Top Breweries are on offer along with best East Yorkshire cider from Moorlands Farm.

Next up is the popular Bridlington Real Ale Festival, held annually at The Spa on South Marine Drive – this year the festival commences on Friday 7th March from 6.30pm running across the weekend, with main bar sponsors Wold Top Brewery. It’s another chance to sample award-winning beers and ciders from across East Yorkshire, and it’s family friendly with a host of live music and great food to accompany your best East Yorkshire ales.

April end heralds the arrival of the Hull Real Ale & Cider Festival, which this year takes place from Thursday 24th to Saturday 26th April 2014. This East Yorkshire CAMRA Real Ale and Cider Festival is based in a unique venue – Holy Trinity Church – and continues to grow as word spreads.

Sample the best of hand pulled cask ales in the bar located in the south transept! Holy Trinity is centrally situated on Market Place in Hull City Centre just a short walk from the city’s main transport interchange.

Browse and book from a huge choice of East Yorkshire B&Bs, hotels and B&B inns listed here on iknow-yorkshire. Whether you’re heading for one of the spring beer festivals, or simply taking a break in Bridlington, the Wolds and East Yorkshire, you’ll find a choice of accommodation bases to suit all budgets.

Some great real ale inns with onsite B&B accommodation feature in the area like The New Inn at Leven village (sponsors of the Bridlington Real Ale Festival) located near Bridlington, the Wolds and Beverley – it’s a top spot for sampling Great Newsome and local Brass Castle Brewery ales. East Yorkshire beers and ciders are in a class of their own, so what are you waiting for. Book online or direct with iknow.