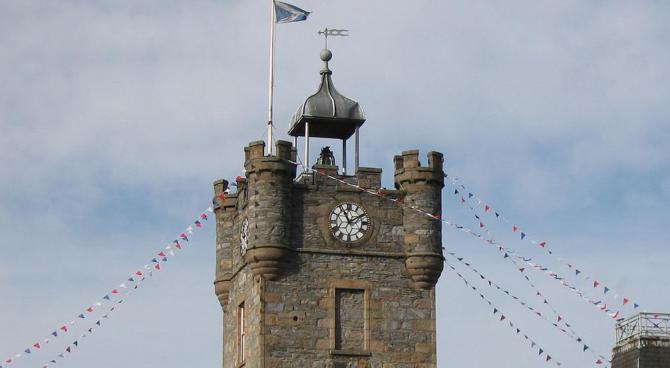 Dufftown, in the heart of Speyside, is situated in the North East of Scotland, half way between Aberdeen to its East and Inverness to its West. Twenty or so miles South from the Moray Firth, it is a great location from which to explore the world’s major whisky distillery district.

Dufftown, in Moray, is a highland community built on the banks of the rivers Fiddich and Dullan, at the foot of the Conval Hills. The village itself is constructed around a spacious four road street plan – all the roads lead to the 1839 clock tower which, though once the jail, now houses the tourist information centre.

The clock on the clock tower has a reputation as “The clock that hanged MacPherson” according to the Dufftown website. MacPherson of Kingussie had been condemned to die in Banff in 1700. He’d been convicted of robbing the rich and passing on the proceeds to the local poor. They must have been grateful because they petitioned for MacPherson to be reprieved. However, with a reprieve on the way, the Sheriff of Banff put the clock forward by quarter of an hour and MacPherson was killed. The clock was then removed from Banff and placed into the tower at Dufftown.

The clock tower is also reputed to have housed an illicit still, the smell of which was covered by the smell of all the legal still in the area.

The annual Dufftown Highland Games are usually held in July and offer the visitor some wonderful traditional highland events – from massed pipe bands to highland dancing, from children’s races and tug-o-war to side-stalls, food and drink. 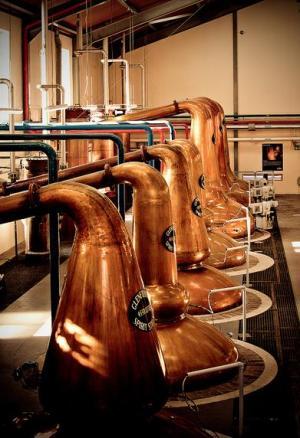 Whisky and the Spirit of Speyside Whisky Festival

Situated on the Speyside Way – a route along the river Spey vastly populated with distilleries making use of the perfect Speyside water, the most famous of which is Glenfiddich – Dufftown is a perfect location from which to attend the Spirit of Speyside Whisky Festival. Held in May each year, the festival hosts a large number of events, held at distilleries and elsewhere. Encompassing pipe bands, educational talks, dancing, music and food, this popular festival brings in whisky-curious visitors from all over the world. Not all of the distilleries are open to the general public, but many are, notably the Glenfiddich Visitor Centre.

Very close to the centre of Dufftown, and also to the Glenfiddich Distillery is Balvenie Castle (originally known as Mortlach) which has been a stronghold of the ‘Black’ Comyns, then the ‘Black’ Douglases, and then the Stewarts. Now the remains are managed by Historic Scotland (though it remains in private ownership), and Balvenie Castle is open to visitors throughout the Summer months. It also gives its name to the Balvenie Whisky at the William Grant distillery just down the hill.

Just a little further to the South along the A941 is Auchindoun Castle. There is some evidence that there might be prehistoric earthworks in the grounds, but today’s ruins are of the 15th century building, too dangerous to be opened to the public until works enabled its reopening in 2007.

A wonderful location from which to begin a cycling or walking holiday, Dufftown is also home to the Huntly Falconry Centre where the visitor can watch flying displays of owls, hawks and golden eagles.

The Keith and Dufftown Railway is an eleven mile rail track which links Dufftown to the market town of Keith (to the North East). The service generally runs from mid-April till the end of September, but do check their website for details. Whisky and shortbread is available on the train during the Spirit of Speyside Festival.

Dufftown is situated at the junction of the A920 and the A941, both major roads traversing the North East of Scotland. Near to the large towns of Elgin, Banff and Huntly which are all on the local rail network, Dufftown’s location directly between Inverness and Aberdeen makes it easily accessible by road and plane.

We are pleased to offer a good number of places to stay during your visit to the North East of Scotland. Properties around Dufftown include many traditional self-catering cottages but also holiday lodges, guesthouses and hotels – all in the midst of whisky country and set in spectacular Moray scenery.