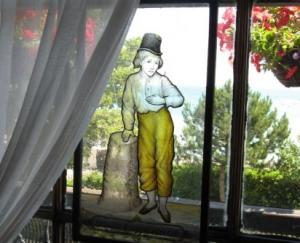 Stained glass at the Dickens House Museum in Broadstairs

Charles Dickens visited Broadstairs for the first time in 1837 when he was just 25 years old. He had already achieved notoriety as an author with the publication of The Pickwick Papers, serialised initially by Chapman and Hall, which was hugely popular with the public. Through his successful years as an author he frequently visited Broadstairs , and in later years affectionately wrote of the seaside town, referring to it as ‘Our English Watering Hole’. It was in Broadstairs that Dickens struck up a friendship with Mary Pearson Strong, owner of Dickens House high up on Victoria Parade overlooking Viking Bay. Mary was his inspiration for the legendary character of Betsey Trotwood (Copperfield’s aunt) in his novel David Copperfield.

Mary was also remembered by Dickens’ son as a warm character who stuffed Dickens full of tea and cakes during his regular visits and went to great lengths to see off donkeys passing by her front gate. Betsey Trotwood too sees off passing donkeys, and the homely parlour of his aunt is described by a young visiting David Copperfield in the novel. The house is located in Dover in the novel rather than Broadstairs. Dickens was keen not to cause any embarrassment to his friend. David Copperfield (DC, the author’s initials reversed), was by Dickens’ own admission his favourite novel, and some autobiographical material from his own struggle in youth is apparent Copperfield’s character. 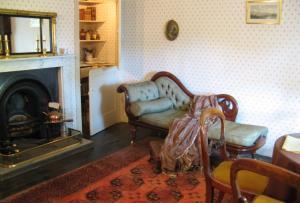 The reconstruction of Betsey Trotwood’s charming parlour inside Dickens House

The much visited museum in Broadstairs was named Dickens House later in the 19th century. The Tattam family bought the property in 1919, and it was their daughter Dora who left it to the town in 1973 to be opened as in the terms of her will as a museum. Seasonal opening times are detailed on the Charles Dickens Fellowship website. Considerable care has gone into the refurbishment of the Dickens House Museum. The Parlour area has been reconstructed as Dickens described it (and as H. K. Browne (Phiz) illustrated it) in David Copperfield. Work by H.K Browne, the famous illustrator of the original Dickens novels, is on display here at the museum, alongside paintings of the period and furniture owned by Dickens himself including a mahogany sideboard.

The museum has received numerous donations of memorabilia relating to the author over the years, and much of it is on display along with letters he wrote describing Broadstairs or which were written whilst he was here. The favourite ‘Watering Hole’ of the Victorian era features strongly in displays of Victorian costumes and posters and photography of the seaside resort as it was in Dickens’ time. The onsite gift shop is free to enter and sells the full range of Dickens’ novels at great value prices along with a selection of souvenirs relating to the author, many of which are unique to the museum including postcards, writing paraphernalia, tea towels, jigsaws and more. History books on the Victorian era are also available.

Another iconic building in Broadstairs with strong links to Charles Dickens is the famous Bleak House on an elevated site overlooking the town and Viking Bay. Dating from 1801, Bleak House was initially the home of a local fort captain during the Napoleonic wars. Dickens leased the property from 1837 to 1859, and spent many summers here. After his death it was renamed Bleak House in his honour, and today the Grade II Listed mansion is a charming hotel with luxury suites and rooms, a reconstruction of Dickens’ study overlooking the English Channel and a little Smuggling Museum.