Crosby on the Sefton Coast just north of Liverpool features a spectacular coastal park spanning four miles of the coastline. In the south, the coastal park is flanked by the busy areas of Seaforth, Crosby, Blundellsands and Waterloo. A promenade cuts across the southern area of the park and Crosby Marine Lake is also in the southern area.

The northern area of the park is more peaceful, home to Hightown Dunes and Meadows – this northern stretch is a designated site of biological interest. Right in the heart of the coastal park is Crosby Lakeside Adventure Centre, a fantastic visitor and watersports centre with on-site facilities including a lakeside bistro and bar, fitness suite, conference and banqueting facilities and on-site watersports courses. 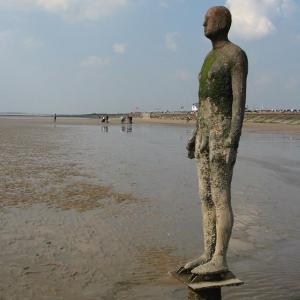 A Quality award-winning beach, Crosby beach stretches for three miles and has stunning views across to North Wales, Snowdonia and Liverpool Bay on clear days. Easily reached from Liverpool and with three stations nearby including Hall Road, Waterloo and Blundellsands, Crosby beach is flanked by the Sefton Coastal Footpath beginning in the Crosby Marine Park area. The trail continues northwards for 23 miles towards Formby, Ainsdale and Southport.

Crosby beach is most famous for the 100 cast-iron lifesize sculptures created by Antony Gormley collectively called ‘Another Place’. Perched on metre high foundation piles, the figures are casts of Gormley’s own body and each weighs 650 kilos. The statues have previously been on display in German, Norway and Belgium. They were expected to move on to the US and New York a few years ago, but it was decided they should remain here on Crosby beach. ‘Another Place’ is incredibly popular with visitors and locals alike.