Corwen, in Denbighshire is an attractive market town at the West of the Dee Valley. Close to the North West of England, Wrexham, Chester and the Midlands, this area of North Wales is picturesque and perfect for holidaying.

Corwen is nestled at the bottom of the Berwyn Mountains to its South, on a plain where five river valleys meet, so is lush and agricultural. With roots in cattle droving, it’s an important market town for nearby farming communities. A great base for the exploration of Snowdonia or the more local areas of Llangollen, Ruthin and Bala, Corwen (most popular in Victorian times) is still a well-equipped town which attracts locals and tourists alike. 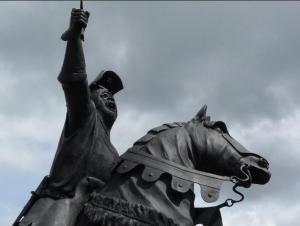 About Corwen and the great outdoors

Owain Glyndwr, (fifteenth century Welsh Prince and folk hero) was from Glyndyfrdwy, to Corwen’s East. There’s a life-sized bronze statue of Glyndwr in Corwen Square, commemorating his achievements and rebellion against the English.

Lovers of outdoors holidays, cycling and horse riding, will find plenty to enjoy here, with its varied terrain of mountain, heather moors and green grazing land. Great walks are to be found on the Dee Valley Way between Corwen and Llangollen, on the Dee’s incredibly scenic river banks. And, talking of river banks, fishermen will love the fishing opportunities the Dee offers – for salmon, trout and grayling.

Corwen’s walking festival presents twelve (Dee valley and Berwyn Mountain) walks – some guided. The festival also includes evening entertainment so do take a look at their link then come back and book accommodation with us. 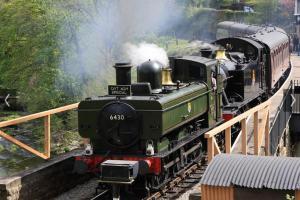 The nearby Llangollen Railway

Caer Drewyn is an historically important but little-known Iron Age hill fort with stone ramparts, above the North banks of the Dee. Though built during the Iron Age it was inhabited for centuries after – possibly even by Owain Ghyndwr, whose legacy is to be seen all over the town, especially in the sixth century Church of St Mael and St Sulien. Glyndwr’s Seat – where Owain was supposed to have thrown a dagger down so forcefully a mark was left in the stone – is repositioned on the South Porch, cut into a lintel. Carreg-y-Big, a 6-foot-high monolith, is part of the church’s East wall.

And for lovers of steam trains, the nearby Llangollen Railway is the only standard gauge heritage railway in North Wales, and is well worth a visit.

How to get to Corwen

The town’s label as the “crossroads of North Wales” is due to the A5 links to England and Ireland. Its position does make it accessible to the main motorways – the M5 North at Chester, or the M54 at Telford to the East. Corwen doesn’t have its own railway station.

Our gorgeous accommodation in Corwen and the surrounding areas, is largely in the form of holiday cottages, though we do also offer some wonderful hotels and guest houses. Check out the lists below if you’re interested in a family fun holiday, a historical break or simply a romantic week of getting-away-from-it-all.