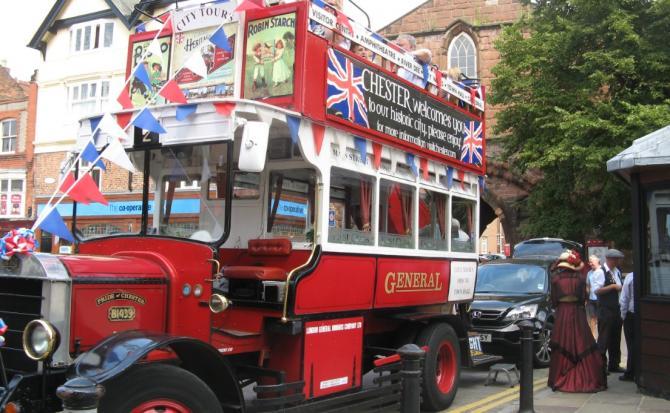 Professional guided tours are available daily in Chester and include a choice of themed walking tours departing from the Town Hall, led by experienced, knowledgeable guides. The perfect introduction to The Walled City, guided walking tours take you on a journey through 2000 years of Chester history. Other great tours include Chester’s unique Vintage Bus Tours on an old style omnibus or pick up the hop on/ hop off City Sightseeing open top bus tour with 17 stops around the city. Superb Roman tours are also available led by an authentic ‘living history’ Roman soldier guide. 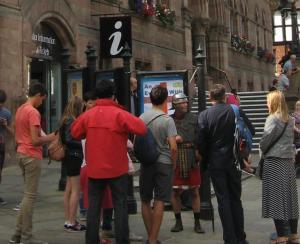 THE CHESTER TOUR – Begin your visit to Chester with a guided walking tour. Several themed walking tours are available including The Chester Tour taking in the Rows, City Walls, the Cathedral and the Riverside. This all inclusive generic tour takes you on a journey through several time periods, beginning in Roman Times, moving into the medieval period, Chester during the Civil War, Georgian Chester and on through the Victorian revival when the half-timbered ‘Chester Look’ was firmly established by a selection of notable Victorian architects. The Chester Tour finishes in the present day, and is available daily at 10.30am (also at 11.30am in peak season, May-October). There is a maximum of 25 people for this tour.

CHESTER WALLS WALK – There’s no better way to explore Chester’s fascinating City Walls than via a guided Walls Walk. You’ll tread in the footsteps of Roman soldier patrols, medieval archers and Georgian promenaders, and experience some of the best views of the city, castle and riverside along the way! Other landmarks featuring on the City Walls walk include Chester’s Water Tower and the remains of the Roman amphitheatre. A maximum of 25 are permitted. The City Walls Walk departs from the Town Hall Visitor Centre on Thursday and Saturday at 2pm. 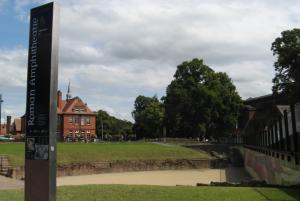 SECRET CHESTER – This fascinating guided walking tour takes in some of Chester’s hidden gems which you might well miss on a visit. You’ll head into places not usually open to the public. See medieval wall paintings in a Norman castle tower and a rare Chester camera obscura. This guided walk (maximum 15) departs from the Town Hall on Sunday, Monday and Tuesday at 2pm.

CURIOUS CHESTER – If you like your walking tour with a quirky edge, opt for the Curious Chester tour which takes in all those beautifully quirky features on Chester’s half-timbered Rows along with many of the city’s hidden architectural gems. A maximum of 25 are welcome. This tour departs on Wednesday and Friday at 2pm.

Be guided around Roman Chester by an authentically dressed Roman soldier who will take you on a journey back 2000 years into the city’s past. Chester’s Roman landmarks all feature in this tour including the largest Roman fortress and one of the largest remains of a Roman amphitheatre in Britain. Roman tours are also great fun and light-hearted, lasting around 90 minutes. They run daily at 12 noon and 3pm from the Town Hall Visitor Centre. 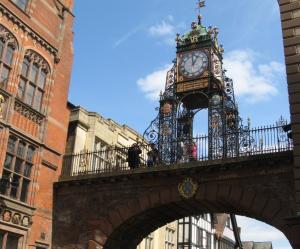 If you prefer a tour where you can sit back and relax, opt for Chester’s fantastic Vintage Bus Tour on a classic open top omnibus. Expert costumed guides are on-board to talk you through the sights and scenes of Chester. Vintage Bus Tours begin at the Town Hall Square and take in all of the city’s major sites including the Water Tower, Chester Cathedral, Eastgate Clock, the Roman Amphitheatre, the Suspension Bridge, the Grosvenor Museum and Chester’s Roodee Racecourse. Purchase tickets on the bus itself, or in the Town Hall’s tourist information centre. The vintage bus is also available for weddings and private hire, perfect for a variety of events, celebrations, conferences and more!

Chester City Sightseeing open top bus tours run daily every 30 minutes on weekdays and Sundays, and every 20 minutes on Saturdays, from the end of March to the beginning of November. Opt for a 24 hour ticket or a 48 hour ticket. You can also pick up Bus and Boat tickets inclusive of an open top bus tour and cruise on the River Dee with Chester Boat. This works well as one of the bus stops along the route is The Groves on the riverside where you can hop aboard your boat trip! 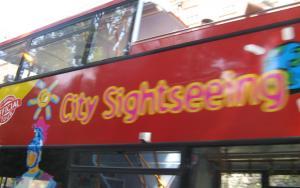 With the option to hop off and on at any of the 17 stops along the tour’s route, open top bus tours make it easy to explore all the major attractions and heritage landmarks in the city. If you’re on a weekend break, the 48 hour ticket is perfect. The 17 stop off points include the Little Roodee Car & Coach Park near Chester Racecourse and the City Walls walk, Eastgate Clock and the Grosvenor Shopping Centre and Grosvenor Street just outside the Grosvenor Museum.

Unsurprisingly Chester’s long and rich history features quite a few spooky stories and mysteries. Numerous Ghost sightings have been reported – indeed the city claims to be one of the most haunted cities in Britain! You can join a Chester Ghost Tour on Thursdays, Fridays and Saturdays from May to December, and on Saturdays only from January to April. Ghost Tours begin at 7.30pm just outside the Town Hall Visitor Centre on Northgate. Purchase tickets direct from the visitor centre or direct from the Chester Ghost Tours website – advanced booking is recommended as demand is high.