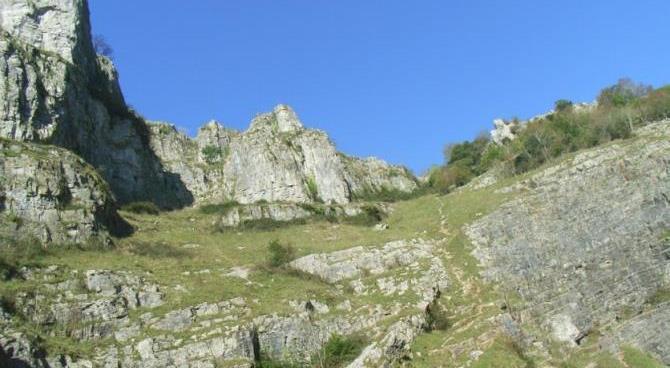 Cheddar village is heralded on your approach by the Market Cross. It dates from the fifteenth century although has been rebuilt over the years, the latest due to a traffic accident! The village has an excellent choice of fine shops and services for everyday items and there is a good choice of hotel and bed and breakfast accommodation. Cheddar village is an excellent base for walks around Cheddar in the Mendip Hills and for visiting Cheddar Gorge and the Showcaves. 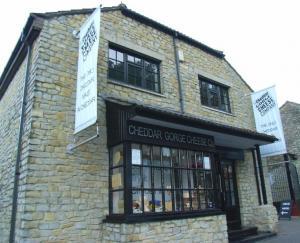 There is a range of events held in the town and The Village Diary publication available in the library and shops in the village has up-to-date listings. Just before Christmas there’s the Cheddar Festive Shopping Night. A farmer’s market and local businesses open late for gift buying and special events like firework displays, choir singing and candlelit tours of Cheddar Caves are take place. Threading your way through the village you’ll find Cheddar Caves and Gorge up Cliff Road to the north west of Cheddar Village. Here you’ll find the concentration of tourist shops, and a whole host of pubs, fish and chip shops and cafes. This includes the only remaining Cheddar Cheese company making the cheese actually in Cheddar – The Cheddar Gorge Cheese Company. The local Tourist Information Office is in Cheddar Gorge itself just down from Cheddar Caves.

According to local legend Cheddar Cheese was discovered accidentally when a milkmaid left a pail of milk in the nearby Cheddar Gorge caves. Later the milkmaid returned to find that the milk had turned into a new tasty substance and Cheddar cheese was born. Whether this is true or not we will never know, as Cheddar Cheese was only first recorded in 1170. The distinctive tangy taste is said to be due to the traditionally rich pastures grazed by the cows whose milk is used to produce the cheese. It was traditionally matured in the Cheddar caves and The Cheddar Gorge Cheese Company has recently revived this tradition.

You will see and smell the aroma of their rounds of cheese wrapped in muslin cheesecloth if you visit Gough’s Cave. The Cheddar Gorge Cheese Company is the only cheese-makers still producing Cheddar Cheese in Cheddar. You can visit the Shop and Dairy in Cheddar Gorge and take a guided tour to find out how Cheddar Cheese is made. They make a whole range of cheeses from traditional mature cheddar to flavoured cheddars with ingredients like chilli, garlic or chives.

Just to the west of Cheddar village is Cheddar Reservoir. This was built in the 1930s to take advantage of the springs from Cheddar Gorge. Although it still supplies drinking water it is also used for recreation including sailing, wind-surfing and fishing. It is in a lovely location with the Mendip Hills behind the reservoir to the north. There are two car park one at the Axbridge end and one on the eastern side accessible from Cheddar.

You can walk around the reservoir which is a good waterside walk with excellent views of the Mendips. The reservoir is also a special wildlife site for its waterfowl, so it’s also a good place for birdwatching. It is particularly important as a wintering site for gadwall, goldeneye, great crested grebe, mallard, teal, shoveler, Cheddar Reservoir also attracts one of the largest flocks of pochard in England and Wales. You can also see migrant waders and terns throughout the year.

Cheddar Reservoir was the first reservoir to allow sailing. The eastern part of the reservoir is leased by Bristol Corinthian Yacht Club. This is a members club but they do organise open events throughout the year. Angling is also popular at Cheddar Reservoir particularly fishing for pike and roach. The fishing is leased to Cheddar Angling Club who also fish at the clay pits below the below the reservoir.