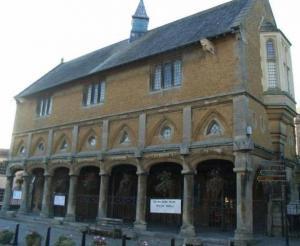 Castle Cary was a medieval market town which became prosperous from its production of horsehair stuffed seating which amazingly continued until the 20th century! The town is just eight miles south of Shepton Mallet and in the centre sits The Market House, a charming mid-Victorian historic building dating from 1855. Inside is a local history museum with examples of old agricultural and domestic artefacts.

Much of the local history has been gleaned from the writings of Rev James Wood-Forde who was a well known diarist in the 18th century. He documents momentous events such as the introduction of the smallpox vaccine, but is frequently preoccupied with his own eating habits which were often lavish! Behind the Market Hall is the circular lock-up that was built in 1779. This was not only used to teach the town’s offenders and drunks a lesson but also truant children who were bunking off school or Sunday school! The high pavements date from the Saxon period and were built in such a way as to help with the loading of pack horses with the cloth that was woven in the cottages here.

Castle Cary has a good range of specialist shops, grocers, an art gallery, delicatessens, cafes and restaurants. The market town is also on the main West of England railway line between Penzance and London and the heart of Wessex line between Bristol and Weymouth. Tourist information leaflets and guides are available at The Market House.