The award-winning Carnforth Station and Visitor Centre is Carnforth’s most famous landmark and featured centre stage in the 1945 legendary David Lean film ‘Brief Encounter’. Watch the David Lean 1945 film, and pick up great books like Richard Dyer’s BFI Classics book on the film before visiting the now splendid reconstruction of Milford Junction station cafe. One room in the visitor centre constantly has the film screening. 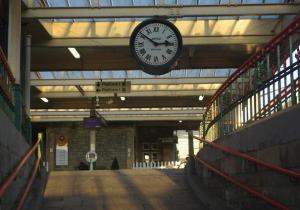 Re-live the brief encounter at Milford Junction. Many features from the film remain at Carnforth Station, including the famous Station clock. Carnforth Station & Visitor Centre includes an exhibit room totally dedicated to Brief Encounter alongside exhibits on the history of the railway, Carnforth Station, station workers and local residents.

The visitor centre is housed within charming restored station buildings, with gallery room areas including The Breif Encounter exhibition, the interactive Thomas the Tank Engine playroom ideal for younger children, and The Albert Halton Room which commemorates and remembers Carnforth’s role in World War I and II. Very high numbers of serviceman passed through Carnforth station during the Second World War.

Changing exhibitions feature in the Bateman Gallery, often with a vintage railway theme, and don’t miss a tour of the on-site gift shop with a range of specialist gifts, postcards and memorabilia.

The Refreshment Room at Carnforth Station

Restored to resemble the original set of the film and the spot where Alex and Laura first met, Carnforth Station’s Refreshment Room is a special thrill for fans of the film. Located on Platform 1, The Refreshment Room has a fantastic breakfast menu, a wide choice of sandwiches and a wide selection of teas, coffees and homemade cakes.