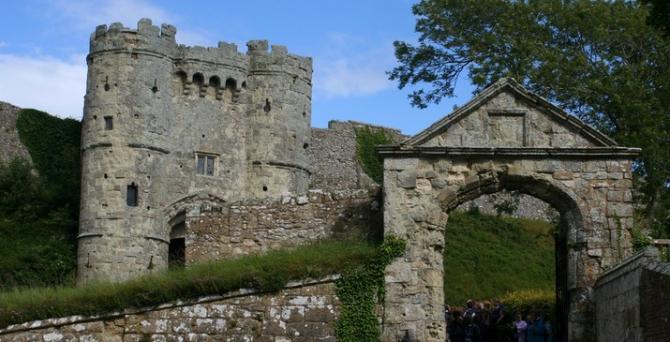 Carisbrooke Castle is 11 miles south west of Newport and is one of the island’s most spectacular heritage attractions. Not only is it a must for those interested in the island’s history but it makes a good fun family day out. Carisbrooke Castle was an important symbol of the island’s independence and successfully saw off the French invaders that burnt Yarmouth to the ground in 1377. It was further fortified to fend off the Spanish Armada in 1588. Today you can explore the castle’s keep and battlements and a variety of rooms that have been restored to reflect different periods in the castle’s history. The Castle Museum has a further collection of artefacts as well as items relating to various aspects of the island’s history.

Carisbrooke Castle is an iconic landmark on the Isle of Wight, and dates from the 12th century. It has undergone a variety of alterations through the centuries usually in order to fortify it against marauding French and Spanish invaders to the island. Charles I visited Carisbrooke and was accommodated in the Constable’s Lodging and a bowling green was created for his recreation. However, as his plots to renew civil war were discovered he was imprisoned during 1647-8. Today the room in which he was imprisoned has been decorated in typical Stuart style.

This room was later used as a dining room by Princess Beatrice, Queen Victoria’s youngest daughter on whom she relied heavily after the death of Prince Albert. Princess Beatrice lived at Carisbrooke and was the only one of Queen Victoria s children to maintain a house on the island. She was the Governor of the Isle of Wight and instigated the opening of Carisbrooke Castle Museum in 1898. The popular Carisbrooke donkeys work on the 16th century tread wheel in the well house which raises water 49 metres from the well. You can also visit them in the donkey centre when they’re off duty! Before the donkeys, prisoners at the castle pulled the tread wheel. Carisbrooke Castle is an English Heritage attraction and open all year round.

The Carisbrooke Castle Museum originated with Princess Beatrice who in 1898 had a desire to "form a full collection of objects of historical interest connected with the Island, so that this memorial gatehouse may become a museum worthy of such an interesting castle". Many of the original exhibits relate to Charles I’s imprisonment here and include personal relics, documents, prints and armour of the English Civil War period. In 1911 local archaeological collections from the old Newport Museum were acquired by the museum increasing its relevance to wider aspects of the Isle of Wight. The collection has continued to grow over the years and displays include clothing and footwear from the Victorian era to the twentieth century, examples of local artisan products such as Isle of Wight lace and pottery and artefacts from the castle and St Dominic’s Priory that was also based in Carisbrooke.