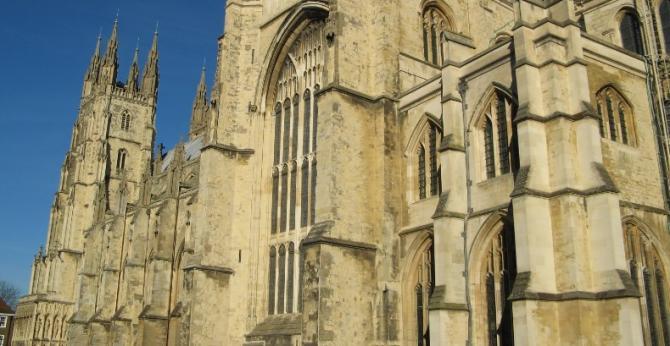 Canterbury Cathedral is one of Britain’s most visited places and has been a major site for visitors and pilgrims since the Middle Ages. The Cathedral, ancient St Martin’s Church and St Augustine’s Abbey ruins all have UNESCO World Heritage Status. The missionary Saint Augustine was sent by Pope Gregory the Great and arrived in Canterbury in 597 AD, establishing a cathedral seat and becoming the first Archbishop. Today the cathedral is the seat of the Anglican church in Britain. The ancient pilgrimages to Canterbury Cathedral and Becket’s tomb were immortalised in English history and literature by the father of English Literature Geoffrey Chaucer in ‘The Canterbury Tales’. Chaucer worked on the Canterbury Tales late in his writing career between 1386/87 until his death in 1400. 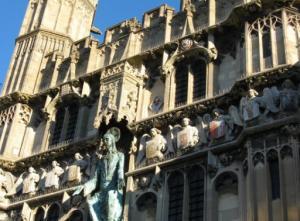 Visitors arrive at the Cathedral via the ornate entrance of Christ Church Gate which dramatically overlooks Buttermarket. Built between 1504 to 1521 (although an inscription on the stonework dates it at 1507), the great gate was originally constructed in honour of Henry VIII’s brother Prince Arthur. It has been much restored over the centuries and is now an interesting mix of styles. The original Christ statue and wooden gates were replaced and remodelled in 1660 by Archbishop Juxon who also had his Coat of Arms inset in the entrance. In the late 1930s the towers were replaced and the Christ statue was replaced are recently as 1990.

A cathedral has stood here on this site in Canterbury since 602 and Augustine’s original building sits underneath the current Gothic Nave. The Normans completely rebuilt it in 1070. Over the last millennium additions and renovations have resulted in a mix of architectural styles. Parts of Canterbury Cathedral including the Quire and beautiful stained glass windows date from the 12th Century. Surrounded by its own walled Precincts, many historic medieval buildings sit within the grounds including a Romanesque Water Tower and functional buildings including a Granary, Brewery and Bakery now all part of King’s School. The Chapter House survives and is one of England’s largest featuring a great oak roof and famous Noble Seat.

A tour inside reveals one of England’s most spectacular Perpendicular Gothic Naves dating from the 14th Century with mighty tall columns pushing up to intricate vaulted roof arches. The Quire and Trinity Chapel date from the 12th Century and in these areas you’ll see the most exquisite examples of stained glass depicting stories linked to Thomas Becket. The Romanesque Crypt is the oldest area dating from the 11th Century featuring many original wall paintings and carvings. 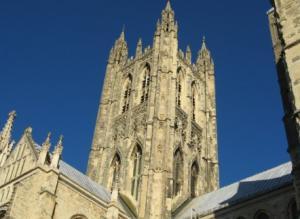 The Martyrdom of Thomas Becket, Canterbury’s famous Archbishop who was murdered in the Cathedral in 1170 AD by King Henry II’s knights made Canterbury a world centre for pilgrimage for centuries. Becket had become a consistent critic of the King and an annoyance, so Henry had him duly murdered. The act made Canterbury Cathedral one of the most popular sites for pilgrimage in Northern Europe, with pilgrims flocking to pay homage to Becket’s tomb within. Today all that remains is an X marks the spot where the tomb once was – Henry VIII had Becket’s tomb removed.

Other ornate tombs of notables include Henry IV and his wife Joan of Navarre, the Black Prince son of Edward III and several Archbishops of Canterbury including the famous Henry Chichele, founder of two Oxford colleges who was Archbishop from 1413 to 1443 and was the longest serving Archbishop of Canterbury. Alongside the tombs sit a spectacular array of monuments and look to the windows – the stained glass here at Canterbury dates from the time of Becket, and indeed some of it depicts his life and work.

Pick up a great value joint ticket for the Cathedral and other city attractions like The Canterbury Tales, any of Canterbury’s top four museums and St Augustine’s Abbey ruins. The Canterbury Passport is available from the central Visitor Information Centre situated at Beaney House of Art and Knowledge on the High Street.

General tours by accredited guides (available in several languages) take place through the day from Monday to Saturday, or you can book a special group tour. Themed specialist tours on topics such as stained glass, music, monastic buildings and architecture, plus behind the scenes tours offering a great insight into the day to day life of the Cathedral, are also available on request. The Cathedral Shop with guides, souvenirs and gifts is located at the exit from the Precincts. You’ll also see mini sales points dotted around the Cathedral. The popular Cathedral Café sits adjacent to the historic Christ Church Gate entrance and within the Cathedral grounds is the Lodge with award-winning hotel accommodation and conference/ meeting, catering and events facilities.