The Backs is the green space of the land sandwiched between Queen’s Road and the six riverside colleges which include Clare College, Trinity Hall and King’s College. This beautiful Cambridge green space affords stunning views of some of the most popular Cambridge Colleges as well as views of the River Cam crossed by historic bridges like Clare Bridge, the oldest Cambridge bridge. Get the best views of The Backs of the colleges from the water on a Punting Tour.

Cambridge has a total of 31 University Colleges, three of which are women’s colleges. Many date from the early 13th century and most famous is King’s College which hosts the Christmas Eve Festival of Nine Lessons and Carols annually. Peterhouse is the oldest Cambridge college founded in 1284. The hall at Peterhouse survives from the 13th century. Architecture by Sir Christopher Wren features in some of the colleges including Trinity College library finished in 1695 and Wren’s first architectural work, The Chapel of Pembroke (1665).

Each of the Cambridge University Colleges have their own entrance fees, public admittance policy and opening times so it’s well worth checking each individual college website for details or visit the Cambridge Tourist Information Centre. Most of the Cambridge Colleges are closed across the exam period annually during May and June. Popular Colleges with visitors which have particularly stunning architecture include King’s College, Queens’ College, Corpus Christi, Pembroke, Clare College, Trinity Hall and Trinity, Granville & Caius, Jesus and St John’s College.

King’s College Chapel, one of the finest Gothic buildings in Europe, is world famous with its breathtaking fan vault and stained glass windows financed by Henry VIII. The Festival of Nine Lessons and Carols is broadcast on Christmas Eve annually. King’s is the best known of the Cambridge Colleges, founded by Henry VI in 1441. Highlights on a tour include The Rubens masterpiece ‘The Adoration of the Magi’ painted 1634 and awarded to the college in 1961. Former students of King’s College include the economist Maynard Keynes.

Christ’s College Cambridge, originally ‘God’s House’, was founded in 1439 and former students include Charles Darwin. The college often hosts exhibitions and events on Darwin. Christ’s College relocated to its present location when King’s was being built. It was refounded as Christ’s in 1505 by Lady Margaret Beaufort, Henry VII’s mother. Tours take in the historic Fellows Garden which contains the famous Milton Mulberry Tree planted in 1608. Rumour has it that John Milton composed some of his poetry under this tree.

Clare College Cambridge with its stunning gardens and oldest bridge over the River Cam was founded originally as Univesity Hall in 1326, then refounded in 1338 by Lady Elizabeth de Clare. The courtyard of Clare College is spectacular and not to be missed. 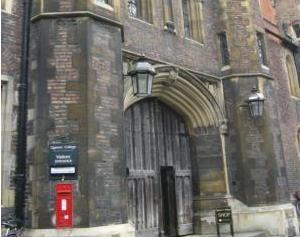 Clare College is the second oldest Cambridge University College after Peterhouse. In the 20th century additions to Clare included Memorial Court constructed during the 1920s to a design by Giles Gilbert Scott. A great way to access Clare College is from The Backs walking along the beautiful tree lined avenue which branches off into Clare’s gardens and pushes up across the River Cam and over the oldest bridge in Cambridge – Clare Bridge.

Queens’ College was founded originally in 1448 by the wife of Henry VI, Margaret of Anjou, then refounded later by Elizabeth Woodville, wife of Edward IV. The medieval Old Court at Queens dating from 1449 survives in its original state.

Former students of Trinity Hall, the fifth oldest Cambridge College founded in 1350, include Stephen Hawking and J.B.Priestley. Tour highlights include the chapel dating from 1366, remodelled in 1729, and the Elizabethan library with Jacobean desks. Trinity College Cambridge was founded later in 1546 famously by Henry VIII in his later years. Trinity is renowned for its stunning Tudor buildings including the chapel built by Mary Tudor in 1554 in memory of her father.

The chapel at Jesus College is the oldest building in all the Cambridge University Colleges – the hall has been in continuous use for over 800 years. Founded by John Alcock in 1496 on the site of a former 12th century nunnery, Jesus College has a spectacular college gate-tower with statue of its founder Alcock. Famous former students have included the poet Coleridge and Thomas Cranmer, Archbishop of Canterbury.