The history of copper and tin mining in the Camborne and Redruth area are integral to the history of Cornwall itself, and indeed the development of mining internationally, as skilled migrating Cornish miners spread their knowledge throughout the world. Some big industrial and engineering names came out of this region, with one of the most famous being Richard Trevithick (1771-1833), who was born in a cottage near Camborne and developed the first beam engine. Trevithick is celebrated annually in Camborne at the end of April on Trevithick Day.

Camborne town centre is packed with landmarks relating to its mining heritage. Centrepiece is the Grade II Listed statue of Richard Trevithick in front of the town’s Passmore Edwards Library. Distinctive church and civic buildings have strong links with mining families from the Wesleyan Centenary Chapel (1839) on Centenary Street to the Masonic Hall (1899) on Cross Street and Market House and the Town Hall (1867). A circular town trail beginning and ending at the Richard Trevithick statue outside the library takes in these and many more beautiful Victorian buildings. 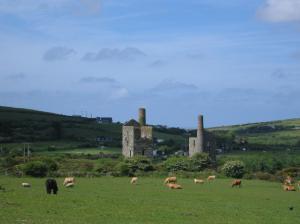 Copper was actually the predominant mineral mined in the Camborne region, with mines at Dolcoath, Carn Brea and Tincroft, East Pool and Agar, West Wheal Seton, the Basset Mines and the Tresavean mines producing thousands of tons of copper, with tin discovered below the copper. On the back of such large deposits, both Camborne and Redruth developed as industrial mining centres, and a whole industry evolved with early adoption of sophisticated technology in areas such as steam pumping. Other industries such as clothing factories, boilers and drill manufacturers also established themselves in the area.

Copper prices declined from the mid 19th Century with increasing foreign competition, resulting in migration and grinding hardship. The experiences of mining families in the region can be seen in the many social history exhibitions in mining centres across the region such as the Mineral Tramways Discovery Centre near Redruth. Dolcoath, one of the largest mines in the region finally closed in 1920. South Crofty, the last working tin mine in Europe closed in the 1990s. Other industries linked to the mining industry in the area also declined such as Bickford-Smith, Vivians, Bartles, Holmans, Bennets, and the Climax Rock Drill company. Today many heritage mining sites like Tuckingmill Valley in the heart of the Camborne and Redruth area have been transformed into award-winning leisure parks. Tuckingmill with its two historic chimney stacks is a conservation area rich in yellow flowering gorse, with a skate park, play areas, walking trails and public art installations.

Easily reached along The Mineral Tramways Trail, the award-winning King Edward Mine in Troon near Camborne is Cornwall’s oldest mine site, the eastern area of the old South Condurrow Mine which closed in around 1890, and reopened in 1897 as a mining training centre. A museum and mill combined, King Edward Mine is family friendly with exhibits exploring how the mining complex developed, guided tours through the processing plant, an introductory film on the mill and the Holman Exhibition, an exhibit on Camborne’s great Holman Bros, world leaders in mining industry machinery who produced their first patented drill in 1881. 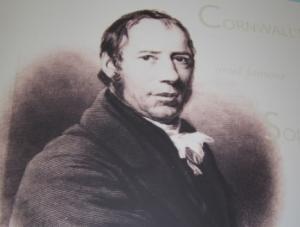 Richard Trevithick (1771-1833), genius Cornish engineer and inventor of the first beam engine cut his teeth in the Camborne area which was at the heart of the industrial revolution in the 18th and 19th centuries. Local need was great in ever deeper mines to develop technology for pumping out water, and Camborne was at the forefront of cutting edge engineering and new inventions in this and other industrial development areas. Richard Trevithick was not just an inventor of steam engines. Working with a small group of skilled Camborne friends and family members, and using basic tools and equipment, Trevithick developed The Camborne Road Locomotive in 1801, effectively the first car. In 1802 he developed The Coalbrookdale Locomotive, the first portable engine to run on rails. In 1803 there was The London Road Carriage – the first coach, in 1804 The Penydarren Locomotive, the first train and in 1805 he drove a barge by steam.

One of the best ways to explore the mining history of the Camborne and Redruth area is to head off along one of the waymarked mining trails in the area, open to both walkers and cyclists. The Mineral Tramways Network encompasses several trails including the Great Flat Lode Trail, the Coast to Coast Trail and the lesser known Tresavean Trail. These magnificent trails take in all the key mine sites and engine house remains in the area, moving through beautiful Cornish countryside. The Great Flat Lode Trail is a good one to start with. It’s a circular 6 1/2 miles long trail passing through the historic Carn Brea Mining area, the most concentrated area of mining remains in the region! Some stunningly preserved engine houses can be viewed on this trail, especially in the southern section. 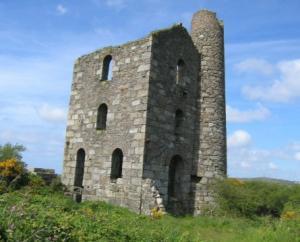 Great Flat Lode (a lode being a vein of ore) is open to walkers, cyclists and horse riders and is mostly off road, taking a circular route around Carn Brea hill (walk to the top of Carn Brea for superb views of Camborne and Redruth mining district). The landscape is mostly farmland and heathland. A picnic is recommended, although you can branch off to a few pubs in the area at Brea Piece, Four Lanes and Troon. Initially in the 16th century mining in this area concentrated on copper, but later when copper was exhausted tin was discovered beneath. Some mines produced tons of high grade tin ore from 1832 to 1880. The remains of dressing floors, stamps, Vanner (Processing) houses and tram roads can all be seen along this trail. The Great Flat Lode is also rich in wildlife and flora. Bats love the derelict engine houses for roosting, and common and bell heather covers the heathland.

Other trails with mining heritage links include the Coast to Coast Trail (11 miles) which connects the two important historical mining ports of Portreath to the north and Devoran to the south. Walkers, cyclists and horse riders are welcome on this re-surfaced trail which takes in beautiful countryside, ancient woodland and historic mining sites. Smaller trails offering gentle excursions include the Tresavean Trail (1 mile) which focuses on the Tresavean Mine and its tramway. Find out more on the Cornwall Mining World Heritage website.