Situated in the heart of Pennine Lancashire, Burnley has a fascinating industrial and social heritage, explored in-depth in the town’s selection of heritage centres, mills, halls and there for all to see in its surviving historic industrial architecture, particularly that flanking the Leeds Liverpool Canal which cuts through the town. The Burnley stretch of the Leeds Liverpool Canal first opened in 1801 and included the Straight Mile stretch where the canal moves 60ft above the town – an internationally acclaimed engineering marvel when it first opened.

Begin your journey into Burnley’s past at the Weavers’ Triangle Visitor Centre at Burnley Wharf. Located directly alongside the Leeds Liverpool Canal in the town, the Weavers’ Triangle is where to head to discover the comprehensive story of cotton cloth production in the town. Burnley’s weaving sheds and its distinctive straight mile stretch of the canal were at the very centre of the industrial revolution, producing textiles up until the late 1970s. The Weavers’ Triangle, so named in the 1970s as this textile heartland area in Burnley is roughly triangle shaped. 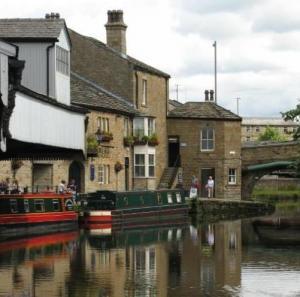 The centre includes the canal’s old Toll Office which collected tolls from canal boats passing through. The visitor centre is interactive, bringing alive how cotton was made for children who can even try a spot of weaving. Exhibits explore particular themes in the town including the famous Wakes Weeks and Fairs (a fairground model is on-site), working conditions in the mills and the history of the Leeds Liverpool canal. You can explore historic buildings along the canal towpath at your leisure (guided walks are available).

A short walk along the canal towpath sees you at Oak Mount Mill which dates from 1830. This mill started life as a woollen mill, but later shifted to cotton spinning with a weaving shed added in 1840. Oak Mount Mill suffered several fires during the 1870s and 80s so much of the remaining mill you see today dates from after the fire in 1876. The weaving shed however dates from the 1840s. 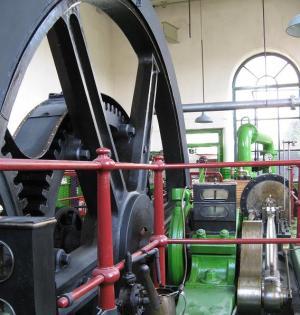 Oak Mount continued production right up to 1979 and was one of the last to close in Burnley. Inside the engine house sits one of Burnley’s industrial heritage treasures – the steam engine installed after a fire in 1886. On several special days during the year you can view the mighty horizontal cross-compound steam engine in action.

Burnley’s famous stately home, Towneley Hall was home to the Towneley family for over 500 years. Surrounded by the extensive grounds of Towneley Park, the Hall is now a museum with numerous exhibits on natural history, local history and textiles, decorative arts and regional furniture. Period rooms and an art gallery are on-site and the Towneley Room explores the history of the Towneley family in Burnley stretching back to the mid-13th century. 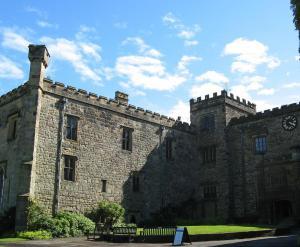 The Local History Room interestingly takes a close look at the period from the 1960s when Burnley’s textile industry was in decline. Other exhibits within the Hall reflect further back on the town’s cotton industry heritage. The collection of art held at Towneley contains some treasures indeed. 19th century British artists are well represented here including work by Landseer and Burne-Jones. Two stunning nudes by William Etty are on display as well as the most popular of the Victorian painters – Cooper and John Philip’s ‘Scotch Fair’ too. Towneley Park which surrounds the Hall is Burnley’s largest park and popular site for local events and festivals, and the park contains a children’s playground and an 18 hole golf course.

A famous historic building along the Bronte Trail, Gawthorpe Hall in Padiham on the outskirts of Burnley is an Elizabethan architectural treasure with links to the Brontes and the 17th century trial of the Pendle Witches. Exhibitions inside include a stunning collection of textiles, costumes and some acclaimed paintings usually on-loan from the National Portrait Gallery. 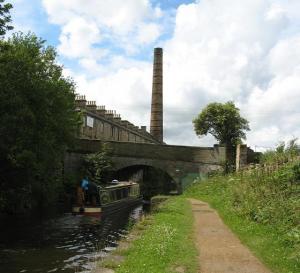 The original architectural design is thought to be that of Robert Smythson who also designed the similar Hardwick Hall in Chesterfield, Derbyshire. In the 19th century Sir Charles Barry was commissioned to revamp Gawthorpe and his touch can be seen particularly in the ornate interior for example in the Long Gallery. The house was most famously the home of the Shuttleworth Family for over 300 years and the nationally renowned collection of costumes and needlework bequeathed by Rachel Kay-Shuttleworth, the last of the family to live here here at Gawthorpe, is on-show inside.

Charlotte Bronte was a friend of the Shuttleworth family and made frequent visits to Gawthorpe. The Hall is one of the key historic sights on the Bronte Way which commences from Gawthorpe heading up towards Wycoller and Haworth beyond.

Other features of interest include Civil War re-enactments (the Shuttleworths supported Parliament during the Civil War as the portraits within illustrate) and the mighty Great Barn (an aisled threshing barn) within the grounds has now been restored to its former glory. A tea room and shop are on-site and the Great Barn can now be hired for weddings.

Queen Street Mill in Burnley is where to head to see working looms and heritage steam engines. The mill famously featured in the recent hit film ‘The King’s Speech’ and has a rich history, initially starting as a workers’ cooperative in 1894/5. The mill saw further expansion in 1901 with the steam engine improved in 1913. This mill continued production right up to 1982.