The unspoilt, sheltered seaside town of Budleigh Salterton at the mouth of the River Otter sits at the western end of the World Heritage Jurassic Coast, within East Devon’s Area of Outstanding Natural Beauty. The two mile stretch of clean, pebble beach flanked by red sandstone cliffs is one of the coastline’s most beautiful, and a walk up to the top of the cliffs is rewarded with spectacular views across the town and Lyme Bay. The High Street with little stream is lined with pretty town houses, unique independent shops, cafes and restaurants. Beach cafes also sit adjacent to the beach. Several authors have referenced this beautiful seaside haven in their work including Noel Coward and Anthony Trollope, and the area has many famous associations including Sir Walter Raleigh who was born just outside East Budleigh. More recently it’s been linked to JK Rowling’s ‘Budleigh Babberton’ village in the Harry Potter series.

Accommodation in & Around Budleigh Salterton 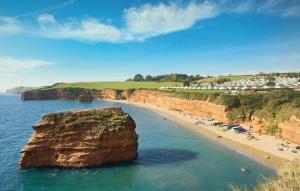 Budleigh Salterton’s famous pebble beach extends for around 2.5 miles from Littleham Cove at the western end to Otterhead and the Otter Estuary at the eastern end. The distinctive Red Devonian Sandstone cliffs are at each end of the town. Several beach cafes, a car park, beach huts (available to hire) and a children’s play area are adjacent, and the seafront area is nice and level making it family friendly and accessible. The clean waters are popular for bathing and fishing. Some sections of the beach are dog friendly even during peak season – check with the town’s Visitor Information Centre on Fore Street for details.

Budleigh Salterton is the ideal base for a walking break exploring both the Heritage Coast and the rolling countryside and river valley of East Devon’s AONB. The town affords direct access onto the coast path, and you can make your walks as short or long as you wish. A great little circular walk skirts around the town starting at the visitor centre, or you can head off east along the coast for around 3 1/2 miles to Ladram Bay with its fascinating geological features and just inland pretty Otterton village famed for its many thatched cottages. The estuary at the mouth of the River Otter is a mecca for migratory birds and a top spot for birdwatching on the Jurassic Coast. 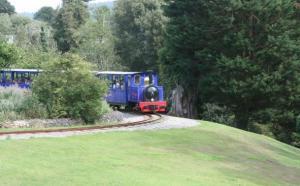 Attractions and things to do in and around Budleigh Salterton are extensive. As well as Budleigh Salterton beach, a park known as The Green in the town centre offers the perfect place to take a picnic, walk the dog or simply relax with the family. For those who like a round of golf, head for the impressive East Devon Golf Club on the cliff top with panoramic views of the Jurassic Coast. Otterton Mill features tours of the still-working flour mill, a restaurant, arts and crafts and regular music events.

See exhibits on the Triassic period at the Fairlynch Museum and Arts Centre on Fore Street in Budleigh Salterton centre. The desert conditions of the Triassic period created the ancient red cliffs you see around the seaside town today. Visit nearby Lily Farm Vineyard for tours and tastings and be fascinated by exhibitions at the old Salem Chapel in East Budleigh. Bicton Park Botanical Gardens is a 63-acre haven for horticultural lovers and families alike just 3 miles from the seaside town. The magnificent gardens are based on an 18th century design and other attractions include the spectacular 19th century Palm House, a countryside museum and a little woodland railway.

A choice of riding schools are within a 12 mile radius and as well as coastal walking along the South West Coast Path there are cycling trails in the area like the Exe Trail. Great off road mountain biking territory is at nearby Woodbury Common, and you’ll find bike hire available in the town centre. Exmouth, just 6 miles away, is where to head for coast and estuary boat cruises.

Visit the picturesque seaside town for a short break during one of its celebrated annual festivals. The Budleigh Salterton Food and Drink Festival heralds the start of the festival season in mid-March, followed a month later in mid-April by the popular Budleigh Salterton Jazz Festival. In peak summer the musical flavour changes to classical and opera during the mid-July Music Festival and in September the Literary Festival is held in the town.

A variety of high quality, mostly family run accommodation is available in and around this relaxing coastal town including luxury boutique style B&Bs (some with beach hut use included!) and a wide choice of pretty cottages just a short stroll from the beach and coast path. Move just inland and discover some beautiful farm B&Bs, old inns with rooms and small, beautifully styled hotels with coast and Otter Valley views. Either side of the town close to popular family beaches such as magnificent Ladram Bay sit family friendly caravan and holiday parks. Access is made easy via the M5 motorway and Exeter International Airport, both within 12 miles of Budleigh Salterton or pick up fast rail links to Exeter St Davids from London Paddington, the North and Midlands, then onward bus travel from Exeter bus station.