Bressay & Noss are inhabited Shetland islands lying to the East of Mainland.

Bressay shelters Lerwick on Mainland, so the town has grown up around the natural harbour in the Bressay Sound between the two islands. It is easily accessible from Lerwick Harbour, even for a day trip. Most of Bressay’s settlements are on the island’s West side, while the South is dominated by Bressay’s highest hill, Ward Hill, at 744 feet.
With a population of about 400, Bressay has its own shop, post office, hotel, pub and heritage centre (with displays and exhibitions on archaeological finds on the island, its wildlife, and local artwork).

Nearby is Gardie House, built in 1724, where Sir Walter Scott stayed on his travels around Shetland. He is reputed to have rowed around Bressay and Noss. The gardens cover 30 hectares and are well noted as an example of formal 18th century landscape – in lush contrast to the usual Shetland landscape.

There are several coastal walks around Bressay taking in archaeological and World War II sights as well as the Bressay coastal views including those over to Lerwick. Heading South of the ferry terminal is a walk to Stevenson designed Bressay Lighthouse. 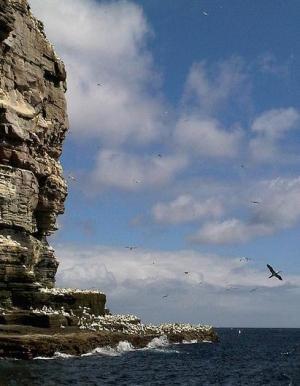 Noss is renowned for being home to some of the world’s largest colonies of seabirds, being a National Nature Reserve. Thousands of birds come here to nest on the craggy cliffs during Spring and Summer including guillemots, kittiwakes and puffins. The island is accessible by small ferry or boat trips for good views of birds, seals and otters. Coastal walks around the island takes you through some spectacular Shetland scenery.

Noss was first settled by Neolithic peoples followed by the Vikings in the 8th century. Later it was used as a stud to breed Shetland ponies for work in the coal mines of North England. Unfortunately there are no Shetland ponies on Noss these days.

The dramatic coastline is with its sheer, craggy cliffs are ideal nesting sites for gannets, guillemots, kittiwakes, puffins, razorbills, black guillemots, shags and skuas. From the cliffs or on a boat you can get up close to see them diving for fish or chattering on the cliffs. Inland the moorland is home to the skootyalan, the arctic skua. These birds furiously defend their nests and young by swooping at any imposters who get too close.The Southern coast of Noss is also home to families of otters, and seals are often spotted around the coast.

The island’s plantlife is also interesting with moorland of heather and bog in the centre dotted with heather, crowberry, common cotton-grass, lousewort, heath-spotted orchid and sea milkwort and the cliffs harbour smaller, hardy flowers out of reach of the sheep.