If you’re looking for some good outdoor activities in the Brecon Beacons there’s plenty to choose from. Some of the most popular include walking, cycling, pony trekking, sailing, windsurfing, canoeing, fishing, rock climbing, and caving. You can either try these alone or as part of a guided group, although the more adventurous activities should be planned with local groups or clubs. You can also book yourself on a holiday with one of the activity centres based in the area. 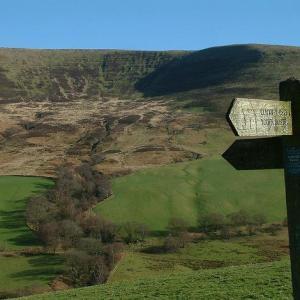 The Brecon Beacons gives you the opportunity to try most outdoor activities. There are a multitude of walking and hiking trails from the easy paved trails taking you through some of the best known sights in the National Park, to the more rugged mountain scaling tracks. It is one of the most exciting caving areas in the country with a variety of caves and cave formations to explore. There are also plenty of routes for those with limited mobility, including families with pushchairs and wheelchair users.

Walking and Hiking in the Brecon Beacons

This is probably the most popular pastime in the UK and it’s no different in the Brecon Beacons. With the rolling scenery and recognisable mountain summits within the Brecon Beacons National Park there is something in the human spirit that urges on to reach these peaks, and has done for centuries. There’s a lot of information out there on particular walks and there are leaflets and booklets available from Tourist Information Centres specifically for walking.

The Offa’s Dyke path skirts the eastern border of the Brecon Beacons National Park and the Taff Trail, a long distance walking and cycle route, passes through the Beacons on its way from Brecon to Cardiff. More adventurous walking can be had by way of Gorge Walking. One of the most popular walks in the East Beacons taking in some of the most well-known Black Mountains summits is one east of the mountains along the southern band of peaks Pen Cerrig-calch, Table Mountain and the Sugar Loaf.

Whatever walk you’re doing make sure you’ve got a map to find your way and orientate yourself if you get lost. Wear appropriate clothing and boots and make sure you take enough layers to cater for any weather – it might be nice and sunny at the bottom but once you’re scaling the heights of the hills the weather is liable to be a lot cooler. The Met Office publish dedicated Mountain Area weather forecasts for the Brecon Beacons.

Pony trekking is popular throughout the Brecon Beacons, but is most popular in the eastern Brecons around the Black Mountains. Ancient bridleways over the hills have traditionally been the focus of pony trekking and horse riding. Nowadays there is also a network of dedicated bridleways and trails on which horseriders can travel without being disturbed by traffic.

There are over fifteen centres within the Brecon Beacons National Park that offer pony trekking holidays, lessons or horse hire! With this traditionally being one of the areas where the semi-wild Welsh mountain ponies and cobs came from it seems only fitting to see the countryside on horseback.

Much effort has been put into providing mountain biking and cycling trails in Wales. Many of the Forestry Commission’s conifer plantations are now providing a useful purpose with custom-made trails that have been designed to offer a variety of riding surfaces and seem to be hugely successful so far. However, the more open and arguably more natural surroundings of the Brecon Beacons have made this the ‘spiritual home of mountain biking in Britain’, or so says a local mountain biker. Not to be outdone equal effort has been made in the Brecon Beacons in identifying routes and providing information packs to help visitors find their way around the National Park.

There are sixteen well researched mountain bike routes identified by colour coding according to difficulty level. These are based around 5 bike hubs: Brecon, Crickhowell, Talybont on Usk, Talgarth and Sennybridge. The routes are aimed at offering everything from short and easy summer evening rides to full-on all day epics over a variety of terrain from challenging moorland tracks to broad, well-surfaced forest roads. There are dedicated websites – one for cycling the other for mountain biking that list the main routes or you can buy the route pack from Tourist Information and Mountain Centres throughout the National Park.

Ten routes have been identified for cycling breaks, holidays and touring within the Brecon Beacons as well as themed rides just outside the border in the Tywi Valley. Again a pack can be purchased from Information Centres throughout the National Park. The Taff Trail that crosses through the centre of Brecon Beacons National Park is part of the National Cycle Route.

South Wales is one of the finest caving areas in the UK. The Brecon Beacons is home to two very extensive cave systems: Ogof Ffynnon Ddu and Dan-yr-Ogof. There are many other caves in the limestone areas of the Brecon Beacons National Park such as those at Craig y Cilau National Nature Reserve.

South Wales Caving Club members have often been the ones discovering and exploring the cave systems in the area. They are based at Penwyllt where cottages that were once used by workers of the limestone quarry that was once here have been transformed into their headquarters and bunkhouse accommodation that can be booked by visiting cavers.

The Brecon Beacons National Park is also popular for outdoor climbing where there are estimated to be around 400 climbs using natural crags and disused quarries in the area. You will need to seek local advice for more information such as the definitive guide produced by the South Wales Mountaineering Club (contact them direct for more information).

There are also purpose built indoor climbing and caving facilities at Llangorse Climbing and Riding Centre which has other fantastic adventure activities for kids and adults alike. Not far from the National Park is the Welsh International Climbing Centre at Taff Bargoed near Merthyr Tydfil. This has one of the biggest and apparently the best, climbing walls in Europe. You can also practice bouldering in purpose-built rooms and they have Britain’s first artificial cave complex with all sorts of cave formations for you to practice manoeuvring through with running water throughout, a waterfall and even stalactites. 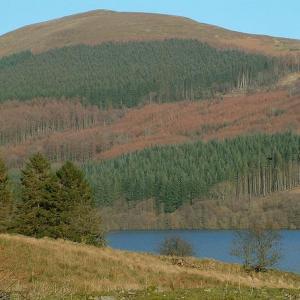 Talybont Reservoir in the Brecon Beacons

With all the lakes, rivers and reservoirs within the Brecon Beacons National Park, there is some excellent fishing to be had. Whether it’s coarse or game fishing you should be able to find something suitable. The main areas are: The River Usk has a reputation as a good trout and salmon river. It follows a pretty route through the Usk Valley from Brecon to Abergavenny. The season for trout is early March to late September and for salmon early March to mid October.

The Usk Reservoir is an excellent trout fishery is 320 metres (1050 feet) above sea level at the head of the Usk Valley. It is in a quiet and remote area of the Park and nestles under the scarp faces of the Carmarthen Fans. Permits are available from a machine located near the dam wall. Fishing from the dam is not allowed and an area to the West of the tower is also preserved for wildlife.

The River Wye skirts the Brecon Beacons National Park around Hay-on-Wye before flowing on and into the Severn Estuary at Chepstow. For coarse fishing there is barbel, chub, roach and dace and big predatory perch and pike. Fly fishing is only permitted until the end of April after which spinning tackle, but no real or artificial baits/floats, can be used until the end of August. From the early September until the close, fly fishing only is the rule again. Talybont Reservoir nestles in the conifer forested Caerfanell valley, a short distance from the pretty village of Talybont on Usk. It has a reputation as a productive brown trout fishery. Fishing permits can be obtained on site from a machine at the water treatment works. Contact Welsh Water/Dwr Cymru for further information.

The same areas used for fishing are sometimes used for watersports. You can go canoeing, kayaking, white water rafting and sailing on various rivers and lakes in the National Park. Llangorse Lake is popular for sailing and waterskiing – although there are some wildlife conservation issues around the recreational pressures on the lake. There are car parking facilities, picnic sites, camping and toilets. The Usk Reservoir is only accessible to organised groups for watersports. Llyn Pontsticill is a large reservoir, just north of Merthyr Tydfil, where canoeing is allowed by arrangement with Welsh Water.

There is good canoeing and white water rafting on the River Wye around Hay-on-Wye. The Monmouthshire and Brecon Canal is open to boat traffic for a more relaxed water based adventure through the Usk Valley scenery. Between Talybont-on-Usk and Pencelli there are a series of lift bridges all of which have been replaced or repaired from their original state. The one at Talybont-on-Usk is now electronically operated. It runs from Brecon to Pontypool; it is all navigable and part of it runs through Blaenavon World Heritage Site. You can have an entire holiday on a narrowboat or just hire a smaller boat on a daily rate.