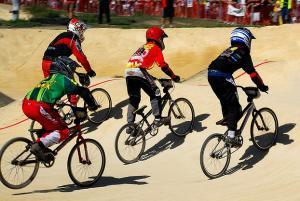 Bournemouth plays host to some exciting sporting events and festivals throughout the year. Held over the May bank holiday weekend, the 7s festival is all about hockey 7s, dodgeball, netball and rugby. With (of course), the strong supporting events of dance tent, lederhosen and fancy dress party, roller disco, karaoke tent, massive music stage, food and drink and more. It is the world’s largest sport and music festival! The Wheels Festival, a free three-day spectacular running over the late May bank holiday weekend, hosts some fantastic events. Supercars and monster trucks mix with BMXers and classic cars. With live entertainment, stalls, food and drink, fundraising Night Ride, fireworks and much more.

Held in April, the Easter Hockey Festival has been running for almost 40 years, with competitions between fifty or so teams, all within Bournemouth Sports Club. A brilliant way for hockey fans to spend a week.

Red Arrows at the Air Festival

Held on the seafront in August, this popular festival includes fabulous Red Arrow displays, trade stalls, street musicians, food and drink, military bands, fireworks, plus big name music performances at the Boscombe and Bournemouth Corona Music Stages, the lower gardens and in front of the sea. There’s music and fun both day and night! Add to this the displays from both Army and Navy and a fleet of ships in the bay.

This festival is held in early October and is both a running festival for fundraisers and those with a personal challenge to meet. With a large selection of running events, the festival draws in many spectators and competitors to the Lower Gardens – the location of this festival’s hub.

Taking place in early Summer each year, this Bournemouth-based event for jet ski and powerboat racers and riders is part of a larger series of races based at five UK venues. Powerboat P1 and Aqua X are amongst the fastest growing marine motorsports worldwide, so this exciting event will appeal not only to those interested particularly in motor sports, but also in fast and furious spectator sports in general.