Bournemouth has more than its fair share of listed buildings and places of architectural interest, even parks (the Lower, Central and Upper Gardens are Grade II listed and include the famous rockery!)! Most of Bournemouth’s buildings date from Edwardian and Victorian times, with plenty of Art Deco-inspired grand buildings too, though there are a few which date from the earlier 18th century. Listed buildings include the Bournemouth Pavilion, hotels (The Royal Bath and Royal Exeter to name but two), many churches including their tombs and cemeteries (Wimborne Road Cemetery has a listed garden), and even Central Station’s telephone kiosks. Other historic landmarks include the water tower, bus depot and pillar boxes – Bournemouth’s history is all around to marvel. 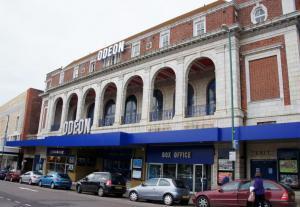 Bournemouth, in common with many other seaside towns, is well known for its prevalent Art Deco style of architecture. The Cumberland Hotel is a good example of a ‘boutique’ Art Deco building on the seafront, or take a look at the former Evening Echo building (now the Print Room bar and brasserie), as well as Beacon House, the West or the bingo hall on Holdenhurst Road. San Remo Towers are particularly impressive – built in 1935-8 in a Spanish style. During World War II they housed an anti-aircraft gun. In addition to listed buildings, Bournemouth also has a fair few blue plaques scattered round its centre and outskirts, with plaques erected to commemorate famous figures such as JRR Tolkein, Tony Hancock and Mary Shelley.