Riverside walks along the Stour

Market town Blandford Forum is famed for its Georgian architecture

Blandford Forum in the heart of Dorset sits in a pretty wooded valley alongside the River Stour. Famed for its Georgian architecture, the town has a feature Market Place framed by some of the most spectacular Georgian architecture in the South West. You’ll find an excellent choice of quirky independent shops here in this hidden treasure market town. The predominance of Georgian architecture is largely the legacy of a fire which swept through the town in 1731. As a result much of it was rebuilt. Blandford Forum has some lovely riverside walks and just outside the town is the Hall & Woodhouse Brewery with brewery tours available.

The annual Georgian Fayre held on May Day has a real Georgian atmosphere with reanactments, funfair rides and many dress in period Georgian costumes. The day is held to celebrate the restoration of the town after the fire. The streets in the town centre are closed to traffic from 7am to 7pm and are lined with stalls selling local produce and traditional locally made crafts. Street entertainers and a fair are also part of the fun. The Georgian Fayre is hugely popular attracting around 20,000 visitors! You’ll find parking on the day just outside the town. 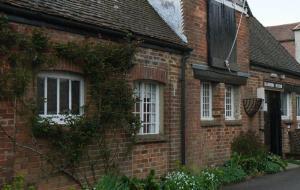 The town museum has a wide collection of everyday items exploring Blandford’s local history spanning four hundred years. Within the museum are recreations of a forge, a cobbler’s shop and a Victorian playroom. There are archaeological finds and fossils as well as World War memorabilia and antique musical instruments. The Fashion Museum in the centre is a typical Georgian house built after the 1731 fire. It houses a collection historic costumes collected by Betty Penny MBE. Outfits date from the 1730s through to the 1970s and you can trace how costume has changed through the centuries. There is also a good collection of accessories including hats, purses and shoes.

Two miles east of Blandford is Blandford Camp, home to The Royal Signals Museum. This is the national museum of army communications. Exhibits tell the story of military communications from the Napoleonic Wars onwards. Displays also explore the history of the Royal Signals and Blandford Camp. Specialist exhibits such as Women at War include filmed interviews with women who served in the army telling the story of their experiences. The museum is open all year round.

Real ale brewers of Badger Ales, Hall & Woodhouse, are based in Blandford Forum. This family run business has been brewing ale since 1777 and one of their earliest contracts was to provide beer to the army based in Weymouth during the Napoleonic Wars. The brewery complex, on the south west edge of Blandford Forum, has a Visitor Centre that is a must for any real ale aficionados. Here you can find out all about the history and brewing process of the brewery. You can also book onto Brewery Tours that take you behind the scenes to see the process at close hand. The Brewery Shop sells the complete range of Badger ales including Golden Glory, Tanglefoot and fantastically named beers like the Fursty Ferret and the Pickled Partridge!