Ornate Georgian and Victorian architecture and a host of historic industrial sites and museums await at Birkenhead. Moving back and forth across the Mersey from Birkenhead to Liverpool couldn’t be easier via the regular Mersey Ferry or by rail, bus and car via the Queensway and Mersey Tunnels.

Birkenhead’s famous Cammell Laid Shipyard is given due attention via an extensive exhibit in the spectacular Wirral Museum based in the old town hall on historic Georgian Hamilton Square. The Wirral Transport Museum & Tramway is also here in Birkenhead, exploring the history of transport and the production of trams in Birkenhead. The town was at the very epicentre of the industrial revolution and innovative Victorian engineering. 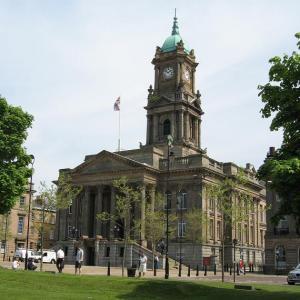 The Wirral Museum around Hamilton Square

Prior to the industrial revolution and Birkenhead’s development as port and dockyard centre, the Wirral was just a small cluster of settlements. The Benedictine Monks at Birchen Head Priory established the first ferry across the Mersey in 1330 by permission of Edward III. This early ferry service improved access to the Wirral, but it was not until the 1820s with the arrival of steam powered boats that the Wirral really began to open up.

From the 1820s Birkenhead became one of the busiest industrial centres in the North with famous industrial names such as George Stephenson planning the Wirral’s first railway in 1840. The first docks began to emerge at Birkenhead in 1847 followed by the famous development of its municipal park. First opened in 1847, Birkenhead Park, with its spectacular lakes and landscaping, was designed by Joseph Paxton. This famous park influenced the design of numerous parks around the world including serving as inspiration for the design of Central Park in New York!

Big shipbuilding names like John Laird moved into Birkenhead in the 1820 at the historic Cammell Laird yard and industries such as tanning, oil refining, flour milling, rubber and paint product production flourished. The 1880s saw the development of railway links including the historic first railway tunnel under the River Mersey undertaken by pioneering Victorian engineers.

Birkenhead’s industrial heritage is revealed in its feast of Grade 1 listed architecture. Birkenhead boasts the highest number of Grade 1 listed buildings situated in one place in England, second only to London’s Trafalgar Square. Hub of Birkenhead’s outstanding architecture is Georgian Hamilton Square dating from 1826. Here you’ll also find the ornate Town Hall dating later from 1887 with local Storeton Quarry providing the sandstone. Down on Birkenhead’s waterfront the mark of Herbert J Rowse’s huge towers are on this side of the water as well as on the Liverpool Mersey side with Georges Dock Ventilation Tower.