Bath’s Roman Baths and so much more

Anyone who has ever been to Bath will realise that it is the architecture which really sets it apart. In fact, the entire city was granted World Heritage Site status in 1987 and is the only British city to have done so. Within Bath around 5,000 buildings are listed and protected!

Mainly created from Bath Stone – a pale, honey-yellow-hued rock mined from Combe Down – and mainly of Georgian origin, Bath is actually more diverse than many visitors at first think. But let’s look at the Georgian period initially. 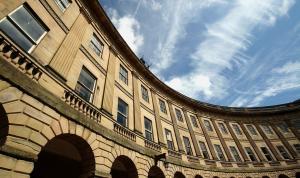 The previously constraining medieval walls of the city were expanded massively by the Georgian expansion. Pattern books created by John Wood the architect were followed by others therefore giving the city a unified style. So, the Georgian Upper Town grew, then the heart of the city around the location of the Pump Room followed.

Royal Crescent is probably one of Bath’s most well known landmarks. Thirty terraced houses form a magnificent and imposing crescent. Building of this now Grade I listed building was completed in the mid 1770s, and the Crescent is now home to Number 1 Royal Crescent – a museum set out in Georgian style. The once-regular tour buses passing these mainly domestic residences have now been stopped, but the park opposite the Crescent, Royal Victoria Park, is now the location of a hot air balloon!

Further Georgian buildings include the Pump Room, the Assembly Rooms, the Bath Collection Museum, the Pulteney Bridge and the Circus. The latter creates a spectacular aerial view of three curved crescents which combine to make a 100 metre circle. The Pulteney Bridge crossing the Avon dates from 1774 and is built in Palladium style. A Grade I listed building, shops cover its entire span on both bridge sides – only four bridges in the entire world have similar retail outlets!

Bath’s Assembly Rooms are open to the public. They opened in 1771, with a U-shaped arrangement in rooms, a large ballroom, tea room and much more. They were severely damaged in the Second World War but are now restored and protected once again, housing the Fashion Museum in the basement. 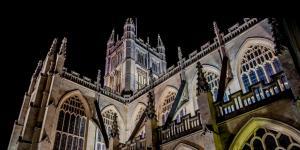 With roots in Roman times, many traces of this era still remain, most notably, at the Roman Baths – though much of the building from ground level up is actually reconstructed, the bases and other parts still remain original. Medieval monastic houses were set up here, including Bath’s abbey which was created in 1499 (over the site of an eighth century church). A cathedral was created too. The only still-existing medieval building within Bath is part of the city walls. Before the Georgian period left its mark on the city, the early eighteenth century expanded it especially around the Abbey – the St Johns Hospital, an almshouse and much more.

Following the Georgian period of massive expansion, Victorian and twentieth century architects did make their mark on the city, but to a lesser extent. The Kennet and Avon Canal opened, and the medieval gothic architecture of the nineteenth century began creeping in. Cleveland Bridge, many churches, and much of the Poets’ Corner Estate, the railway station and Victoria Art Gallery all date from this period.

The twentieth century saw the Empire Hotel, the Royal United Hospital and many more buildings arriving in the city, sometimes to replace those damaged by the Second World War’s air raids. Also. some clearances of old housing made way for the new. All, hopefully enhancing the character of this very special city.